1) Well that result really sucked. Please describe how you feel about the loss using lyrics from a pop diva (eg Brittany Spears, Rihanna, etc) song. Bonus points for video or pictures. (something good has to come out of last week)

2) While we all want to move on, last week's game can teach us many things about the '11 Irish. After seeing what Week 1 brought us, do you find yourself more confident, less confident, or still confused as hell about our chances vs the Skunkbears? Why?

More confident, provided we can protect the football. I'm willing to chalk up some of the sloppiness with the ball to first game jitters. But we doubled up SFU in yardage, and despite shooting ourselves in the foot repeatedly, we still only lost by 3. Clean things up, and the team I saw on Saturday is capable of competing with anybody in the country. And Michigan sucks, so we should be able to win easily.

3) Other than QB, which position group pleasantly surprised you this past week? Which disappointed? What player absolutely MUST see more time in Week 2? Again, no QBs.

Running back pleasantly surprised me. Although we got in the whole too early to really utilize our running game, Cierre Wood averaged almost 5 yards per carry. If that continues, and we can avoid the blunders that put us into an early hole, we will roll over some teams on the ground this year.

I'm not sure I would identify a particular player that must see more time in Week 2. I like the rotation we have, and I'm not sure that giving any individual player more time will help anything. I like what I saw from Louis Nix, so I guess if forced, I'd pick him.

Michigan sucks. (I'm trying to put this in every answer, which is hard when you ask about our team...)

4) Tommy Rees will lead the Irish Offense this week. Do you agree with Coach's call? Either way, what part of Crist's game will the Irish O miss the most, if any?

I was a big supporter of Dayne Crist. But at this point, it appears that all Tommy Rees does is win. He may not have the measurables that Dayne has, but every time he's been in the ball game, he's beaten the opponent. And that includes Tulsa and South Florida - he was trailing both times when he went in, and while he was QB, we scored more points than the opponent. Until such time as that changes, I say we go with the hot hand.

We'll miss Crist's athleticism. He may not be the truly mobile quarterback that Hendrix or Golson is, but he does have a stronger arm and better escapability. Without Crist, the receivers and O-line need to step up their game a bit. But Michigan sucks, so even if they don't, we should win.

Protect the ball. Michigan sucks when they don't get turnovers, and would have lost badly to Western Northeastern Southerly Michigan last week if they'd protected the ball.

Over-under on Floyd's receiving total for this coming weekend: 154 Under. The Wolverines have more talent on defense than USF, and they will be looking to shut down Floyd. Whatever was bothering Riddick needs to disappear, because he can have a very big game as a result.

Over-under on Robinson's rushing total: 100 Under. I think that the defensive goal will be to contain Denard Robinson and force Michigan to beat us through the air. We struggled last year against him, but I think that the switch to the pro-style offense and the improvement of our defense since last year means that we will contain Robinson on the ground. Plus, Michigan sucks, and Denard Robinson plays for Michigan. So he sucks.

Over-under on ND Number of Turnovers: 2 Under. The offense is going to be so focused on protecting the ball this week, I'll be amazed if we turn the ball over. It may hinder production a little bit, but I know these guys will be completely focused on playing mistake-free football, rather than going out there with guns blazing.

Over-under on Number of Times Kelly is caught Purple Monstering Out: 2 Under. Coach Kelly has heard the criticism, and will adjust his behavior accordingly. I think this is BS, as all great coaches yell at their players. I don't understand why people are freaking out about this. I like the fire and passion from the head coach, and I think it rubs off on the team.

Over-under on ND Total Yards: 425 Under. To complete the sweep of under predictions, I think the Notre Dame offense will be productive, but conservative. I'm tempted to take the over on this one, but I think Notre Dame will be focused on protecting the ball and controlling the game, rather than airing it out for big yards.

7) Michigan: Just Another Opponent, Enemy, or Rival? Explain. 1 Bonus point for each use of the word 'suck'.

Michigan sucks. Your Rival doesn't suck - they've earned your respect. Just Another Opponent may or may not suck, but usually you don't care enough to say that they suck, regardless of how much they actually suck. Your Enemy sucks. They suck big time. And you want the entire world to know exactly how much the suck. And as enemies go, Michigan pretty much puts the suck in sucktitude. They suck so badly, that the wind reverses every quarter when they switch sides. They are the suckiest bunch of sucks that ever sucked, and I can't wait to see them suck on Saturday.

8) It's Michigan week. Name 1 thing in the world that sucks as much as Michigan, if you can.

I got nothin'. Next to suck in the dictionary, there's a picture of that big block M.

9) RichRod is back, announcing for CBS. Can't wait to see how that goes. Bet he's horrible.

Yeah. I bet he is too. He was a coach at Michigan. So he sucks. Just like Michigan sucks. And you can't wash that kind of suck off. 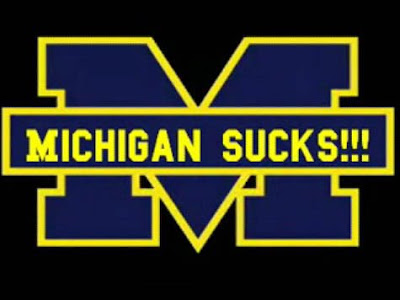 Can a lawyer, who did not attend ND, not use the word "sucks" in a sentence?

Just so I understand what you're asking for: you would like (1) a lawyer to provide you with a sentence that does not contain the word "suck"; and (2) said lawyer not to be a graduate of Notre Dame?

Why do you hate us? Signed, M grad from three generations of M grads.

hey that is a nice video and I think this is the third time I have watched it and it does not get old :D