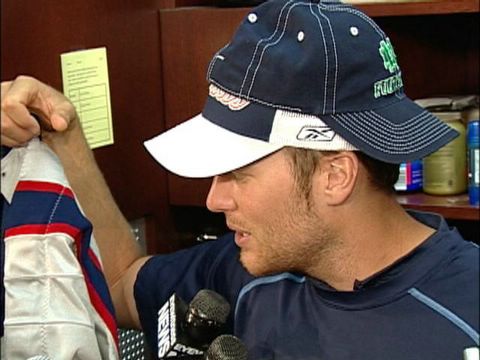 The Irish are fresh off of a big win over their hated foes (not rivals, foes), the Michigan Wolverines, and as a result have retaken their place in the Top Ten rankings, coming in at 10 in the AP poll, and 12 in the Coaches poll. Coming to town for the home opener this year are the Michigan State Spartans, who have had a termendously prolific offense in their first two games against sub-par opponents. Also, the Spartans have won 4 straight games in the House the Rock Built, so they won't be intimidated by the fervor this week.

During the preseason, this would have been a scary discrepancy on paper - Notre Dame's depth and experience against a bunch of green cover guys with almost no depth. With a couple of games under their belts, this gap has lessened, but is still nowhere near a draw. Notre Dame is hurt by the temporary loss of go-to-guy Rhema McKnight, and the MSU secondary has stepped up their game, controlling pass-happy Hawaii last week. Still, Quinn will simply spread the ball around, and I expect the passing game to be effective, if not impressive. I expect Charlie to exploit the secondary with deep routes, using a lot more of Matt Shelton, who is returning to 100% from off-season knee surgery, and his O-line's pass protection.

Even though Charlie may go too the air more in this game, I still expect him to give Darius 20 touches. The linebacking corps are inexperienced, but they do have some depth and talent. This unit does not have a star like Pitt, or the athletes of Michigan, so if Notre Dame gets a lead, expect us to wear them down with RPN and Schwapp late in the game.

This defensive line is not very fast or athletic, and should therefore give Brady all day to sit in the pocket. However, they are the biggest D-line we will face this year, so don't look for Weis to test the interior line with the run; he'll probably run off-tackle and sweep plays to isolate the running backs against the linebackers early. Later in the game, the 300+ pounders will tire of attempting to chase Darius, and the lack of depth will come to the forefront. If Charlie gets a lead he'll pound away inside late to take advantage.

Looking at the gaudy numbers coming in, it is hard to give an edge to Notre Dame's secondary, but this unit isn't nearly as talented (except perhaps at quarterback) as last week's opponent. There are no superstar receivers, but they are talented throughout. Last week, the Irish secondary stepped up their level of play, and for the first time in ages, didn't give up the big touchdown pass. Because I can't tell if Michigan State is for real due to their less-than-stellar opponents to date, and the secondary hasn't played enough games to build a reputation for shutting teams down, I'm calling this a draw. I'm calling for a blow-out win below, but if Michigan State's offense is as good as they appeared to be against lesser opponents, they could be the biggest test for this unit from a scheming standpoint.

Again, this unit was very prolific in MSU's first couple of games, but Hoyte is playing at a near all-american level, and Corey Mays has shown that he can be a terror as well. Crum improved greatly between weeks one and two, and Michigan State is the first team that doesn't get a lot of production out of their tight ends (despite a system that is designed to have receiver-first blocker-second tight ends). This should free him up a little bit to start hitting people, and could be a key to shutting down this potent offense.
Caulcrick and Teague operate as a running back by committee system, with Teague listed as the starter. However, Caulcrick is the star, and at 243 lbs. is a beast to bring down. Overall, though, this one of the less talented running attacks we'll face this year, and they shouldn't be a problem.

Experience, size, and depth are the triumpherate of good offensive lines, and MSU has them in spades. While they aren't the best line we'll face, they are at least as good as the Michigan O-line. Our defensive line showed their awareness by batting down 5 balls last week, and have been good at getting pressure, but their lack of sacks continue to worry me, especially with a quarterback in Stanton that uses his feet to buy time in the pocket or rush for a first down. If Vic Abiamiri is going to prove himself as a pass-rusher worthy of the fear that Justin Tuck engendered last year, he'll have to do it soon.

Until somebody shows me that they can plan for Charlie's preparation, I'm going to give the edge to Charlie every time. John L. Smith is a system coach who came to MSU from Louisville (who hasn't suffered much since he left...), and his system seems to be coming together. His defense is still suspect, and hasn't been tested. Charlie and Minter should be able to outscheme MSU, and will probably have a game much like Pitt, without the sloppy second half.

The X-factor in this game, and in my opinion the key to transforming this from a win into a blowout, is the crowd. While Michigan State has won four straight at Notre Dame, and talks like they aren't intimidated by the atmosphere, they will be in for a rude awakening this week. Consider this for a moment from the fans' perspective. Last time we saw this team was a 41-38 heartbreaking loss to Pitt, which was one of the final nails in Willingham's coffin as Notre Dame head coach. The game before that was also a heartbreaking loss to hated little-brother school Boston College, the Fredo of Catholic Universities. The Irish were perpetually unranked and undercoached, and it was all we could do to get ourselves up for the game.
Now the very next game, the #10 ranked Fighting Irish of Notre Dame make their triumphant return to Notre Dame stadium, led by a confident and successful coach who has done everything right since his hiring only months after the previous coach went the way of the Dodo (also known as the Huskies, but we'll get into that next week). We have a top recruiting class, a high ranking, we've managed to prove to the naysayers that we made a good move in getting rid of Ty.
A key to Notre Dame football is the connection the team has with their fans, especially the student body. In 4 fewer years, Ty and Davie managed to lose more home games that Holtz did in his entire career. Also, winning at home builds a buzz around the team, and Davie/Willingham managed a 10-game home winning streak during the transition between the two. Holtz put together a 19-game home winning streak during the run for the national title, almost twice as long. Losses at another team's stadium we can swallow. Losses at home we can't. Expect Charlie to allow his team to feed off te crowd, and rebuild the mystique around Notre Dame stadium , the way he helped to do in Foxboro, where nobody wanted to play in the dead of winter. 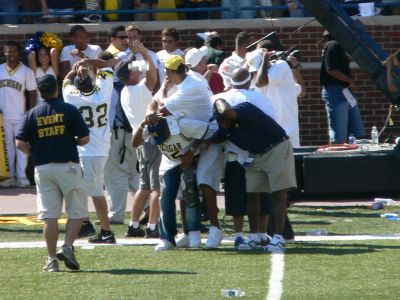 No wonder Michigan is such a football powerhouse. Who wouldn't want to commit to a school after being pelted by water bottles and watching that school get manhandled by the Irish?
Posted by Wacko at 10:35 PM No comments:

The University of Notre Dame has retaken their rightful place among college football's elite programs in the national rankings (#10 AP, #12 ESPN/USA Today).

Below are my rankings, through which I compare strength of opponents, strength of wins (did you beat opponents you were supposed to beat? did you squeak by an opponent you should have kicked all over the field?) and especially record. Here is my top 25 this week: