I was reading a message board posting on NDNation.com today, where someone suggested that we add cantilevered seats on the east side of the stadium. I thought this was a horrible idea. However, with Juniper Road closing down, I think there may be something to another poster's idea - luxury boxes.

If done right, this can add some revenue generation to the stadium without resorting to tacky advertisements or Jumbotrons.

I took a couple of minutes with Paint, and made a crude drawing of how this might look: 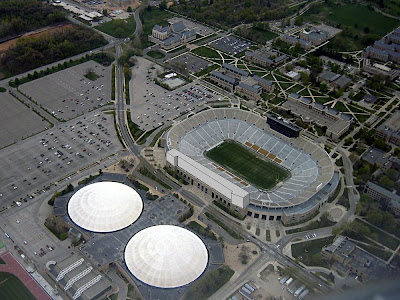 I really like the idea, I think it adds to the grandeur of the stadium, without becoming tacky. It doesn't block the view of Touchdown Jesus, and It can be tastefully done to match the rest of the stadium facade. Indeed, the other side of the stadium (with the press box) could undergo a similar expansion, allowing for more luxury boxes on that side as well. Think of this as being similar to the old Soldier Field facade (before they crashed a spaceship into it).

I think they should take it even a step further, expanding the construction towards the JACC and moving the Monogram Room from it's existing spot in-between the domes of the JACC into a building that connects to the stadium. During the offseason, it could serve as a sort of Notre Dame football museum. On game day, they could creatively use the space as a grand entranceway.

Other arenas and stadiums have some impressive entryways, with grand lobbies that pay homage to the history and tradition of the program. For example, there is a great section of the Conseco Fieldhouse which chronicles the history of Indiana basketball.

What do you guys think?

UPDATE: A ND architecture major made a much better, more professional rendering of what this might look like. The pictures are available on the Rock Report here.
Posted by Wacko at 2:31 PM 3 comments: