1) Given the stat-lines of Brian Kelly’s first Blue and Gold Sprint Spring Game, it seems obvious to me that the media will be shark-feeding from now until the first game of the 2010 season over our new-found “quarterback controversy.” I mean, didjya see MONTANA SON of MONTANA throw those TD PASSES!? HE LOOKED JUST LIKE MONTANA! So let’s all do the responsible thing as “Notre Dame Blogs: Protectors of the Realm” and come to full agreeance about this so-called controversy and put it to rest right now: Nate Montana should be the starter, right?

Of course not. I don't care how he looked in the spring game. The defenses weren't blitzing, and he couldn't get hit. Crist is a more athletic quarterback, and a better overall fit for the system we run. I was very encouraged by what we saw out of Nate - I'm not nearly as worried about our backups as I was coming in to the game. That said, however, Crist is head and shoulders above any of our other quarterbacks, and we'll miss him desperately if he gets injured this year.

2) One of the over-arching themes of the 2010 Spring session of Notre Dame football was that Brian Kelly has been spending a lot of time trying to change the overall attitude of the Notre Dame team. To quote Kelly, “What I want them talking about is, ‘It’s me that gets that first national championship,’ not ‘I want to be the No. 1 draft pick.’ That’s what we’re reshaping.” Do you think that unexpectedly long wait-time this weekend for Golden Tate and Jimmy Clausen to receive that magical phone call from some NFL team will go noticed by any of the Irish footballers who, until this weekend, weren’t getting the message from Kelly? Was there anything this spring that you noticed that made you think that most of the team was already on board the Good Ship Greater Good and that the transformation in that regard was complete?

Actually, I was disappointed in the effort level I saw from the team on Saturday.  I know it's just the Spring game (and to be fair, due to work I missed the 1st quarter).  However, I felt like the players were sort of going through the motions out there.  I wanted to see these kids playing with some fire and passion, and what I saw was a group of kids that still don't know their assignments very well, and are spending too much time thinking and not enough playing.

That said, I think that the team is going to buy in.  The leadership on the team will bring everyone else along.  I think that there are a few players who are still Weis' guys, and haven't yet gone all in for Coach Kelly.  That said, the most impressive thing that Kelly has pulled off here is that there are no defections - nobody has left the team.  Yes, Clausen and Tate left for the draft, but that happened prior to Kelly getting hired.

The fact that nobody has decided to transfer is what tells me the most about this team.  To a man, they have bought into more than just Weis or Kelly.  They've bought in to Notre Dame.  They came here, the vast majority of them highly touted talents out of high school, with an agenda.  To bring Notre Dame back to where it ought to be.  Sure, some of them had NFL dreams in their eyes, but if that's all they cared about, they could have gone to USC or Oklahoma or Florida.  Ultimately, they all chose Notre Dame because they buy the mystique and the legend.

And that, more than anything, gives me hope for this group of kids and this coaching staff.

3) A fair number of players made a pretty good splash in Spring Ball and in the Blue & Gold Game. Name one you didn’t notice belly flopping into the big pool of opportunity and explain why that disappoints you. Or, if you really want to be creative, explain why you’re glad that particular player didn’t win any belly flop competitions. 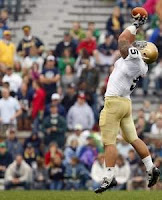 Michael Floyd.  I just didn't see the level of effort out there that you would want from the most talented guy on the field.  Most players make their biggest leap forward in between their sophomore and junior seasons.  Floyd has the athletic ability to be the greatest receiver in Notre Dame history before his career here is done (if he stays for his senior year).  However, he's going to have to step up his game and start leading this team.

On the flip side of that coin, Manti Te'o is doing exactly that.  Maybe he should give Floyd some pointers.

4) Pick one quotation from Spring Ball sourced by an Irish coach and parse the living hell out of it.

This quote came just a few practices into the Spring, and it is the kind of quote you don't often see from a head football coach during spring practice.  They usually talk about progress and development.  But, Coach Kelly sent a clear message not only to his team, but the public at large, that things have got to change.

Remember in the Spring and Summer of 2007, when Coach Weis refused to use the term "rebuilding"?  How he talked about everything but the glaring deficiencies left in the upper classes from Willingham's inability to recruit?

Not this guy.  He knows what is at stake, and he is not going to mince words.  He also said that Manti Te'o wasn't very good and Michael Floyd has a lot of work to do.  And those guys are potential All-Americans.

He is raising the bar for everyone in the program, and trying to effectuate a cultural shift.  For too long, this team has been slowly moving away from the Notre Dame mentality to a more self-serving mentality that cares more about draft stock than the on-the-field results.

Like or dislike Jimmy Clausen and Golden Tate, I think that them both leaving early was a sign of this change.  Sure, they had great seasons, and they were facing a coaching change and uncertainty with the NFL's salary cap situation.  And I'm not going to sit here and say that it was a bad idea for either of them to come out early - post draft, hindsight is 20/20 and that's not fair.  That said, they were more concerned about their own future than committing to the future of the team.

Spread option or not, don't you think the transition to the new coach would have been greatly eased by the presence of a veteran All-American quarterback and a returning Biletnikoff award winner?  I can't say that I would turn down that kind of money to stay in school, but I do know that that if they were thinking more about the team than themselves, we would have arguably the most talented returning offense in the country, new scheme or not.

And that is the cultural shift that Kelly is trying to achieve here.  Team isn't the first thing on your mind - it's the only thing.  From the head coach, all the way down the line to the support staff.  Time will tell if this mentality takes hold, but if it does, watch out.

5) Select one stat from the 2009 season that either troubled you greatly or made you brag to all your coworkers who cheered for teams with sucky comparable stats, and explain why that particular stat will be vastly improved or ruined in 2010 based on what you’ve seen in the spring.

Yep, that's what our defense gave up to our opponents on the ground last season.  We were soft against the run, ranking 89th in the country in rush defense.  Gone are the days of the Snow Bowl, where the other team had to fight for every inch they gained against us.  And God forbid they try to get that last inch between the ball and the end zone.

I'm not sure whether that stat will improve next year by a significant amount based upon what I've seen - th Spring game was a very vanilla defense against a deep and talented stable of running backs.

However, Coach Elston's statements about getting into the backfield give me some hope that we will be able to disrupt opposing team's offenses.  It certainly helps that we have a coherent defensive identity for once, rather than the hodgepodge we've had the last few years.

6) Bonus: Stick figures, collage, stolen work, hotlinked photo, professionally edited photoshopping, whatever… give us a visual that best represents everything you’ve seen from spring college football, Irish and/or otherwise, in 2010. 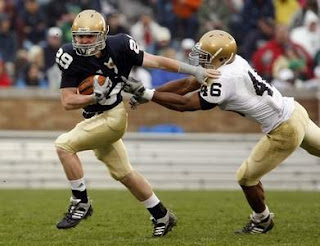 For those of you not familiar with #29 in this photo, that would be one Patrick Coughlin, senior walk-on tailback, who came in during the second half and showed me one of the few bright spots in an otherwise somewhat forgettable spring game.  He'll probably never make the field this year, except perhaps a brief appearance in mop-up duty if we can find a way to blow someone out.

However, he showed the grit and determination that I know Coach Kelly is looking for in his players.   His effort on Saturday was one of his few chances to shine in Notre Dame Stadium, and he took full advantage, rushing for 80 yards on 11 carries.  And that's Steve Filer, former 5-star recruit and legit challenger for a starting role on our linebacking corps trying (unsuccessfully) to bring him down.

I thought about putting up a picture of Cierre Wood, the oft-fogotten 5-star all-everything #1 overall running back recruit that redshirted his freshman season last year, who ran for 110 yards on 10 carries, for a whopping 11.0 ypc and 2 touchdowns.

What they both show, and what really struck me about this offseason so far is the opportunities presented.  These players each have a clean slate to work from, and unlike the last few coaching transitions, the veterans are being pushed by players with at least as much athletic ability.  So whoever we put out on the field, they will have had to earn it.

Armando Allen, Kyle Rudolph, Michael Floyd, Brian Smith, Chris Stewart and even Dayne Crist are clearly the leaders at their respective positions.  But there's no room for them to coast or sit on their laurels.  AA has 4 running backs that could legitimately start if he doesn't pull his weight.  Michael Floyd may have some competition from Tai-ler Jones.  Even Nate Montana had a better stat line than Dayne Crist in the Blue-Gold game.

So, as spring turns into summer, and summer cools into fall, don't be surprised if the depth chart on opening day has some new faces on it.  If they can take advantage of their opportunities.
Posted by Wacko at 5:42 PM No comments: