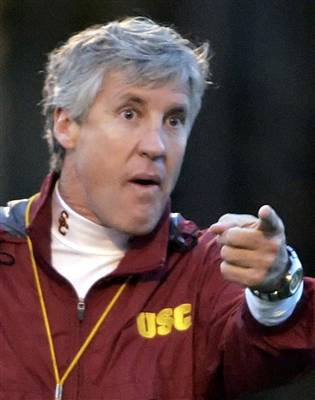 With the recent allegations of impropriety at USC (this time in their basketball program), I got to wondering exactly how many incidents there have been at USC involving alleged violations or or misconduct. I found exactly what I was looking for over on Bruins Nation, a great UCLA blog.

Please click on the above link to read the full article, it's well worth it. The author even required two sources before putting any of the allegations in the list, making me wonder how many non-corroborated stories are swirling around the program.

I would like to point out some of the more significant events:

* Pete Carroll was hired as head football coach by USC in 2001.

* On August 23, 2001, the NCAA placed USC's athletic department on probation for two years and cut scholarships because tutors wrote papers for three athletes in the late 1990s. (Ed. note: This could become extremely important in any future NCAA investigation, as it may open the door to treating USC as a repeat violator, with harsher punishments.)

* On December 21, 2005, USC starting quarterback Matt Leinart had his eligibility temporarily revoked after appearing in a promotional segment on ESPN earlier that month, a violation of an NCAA rule. Leinart was reinstated shortly thereafter. One observer claims the NCAA was just concerned about money.

* On January 1, 2006, reporters from the Fort Worth Star-Telegram and CBS Sportline reportedly told the USC football team about potential recruiting violations stemming from visits by USC recruits to Papadakis Taverna, a Greek restaurant owned by former USC linebacker John Papadakis. As of July 2007, the investigation by USC compliance officials continued.

* On January 21, 2006, USC quarterback Matt Leinart was cited by the Pac-10 for working out with his own coach using school facilities. According to the NCAA, a student athlete cannot utilize the school's facilities to work out with a coach, unless the coach is affiliated with the university.

* On April 21, 2006, the family of USC running back Reggie Bush was implicated by numerous separate media reports as having lived in a house purchased by a San Diego-area man with ties to a sports agent and a tribal casino. Both the Pac-10 and the NCAA have launched an investigation into potential NCAA violations in connnection with this matter, which is pending. More recent reports in this fast evolving story are here, here, and here. Yahoo Sports, which is responsible for much of the investigative reporting on this issue, has set up a page dedicated to its eight-month probe here.

* On April 30, 2006, it was reported that USC compliance officials were investigating whether an NCAA rule was violated because receiver Dwayne Jarrett failed to pay approximately $10,000 for his half of the rent for an upscale apartment he shared with former quarterback Matt Leinart. USC claims that no rules were violated, though it was initially reported that Jarret may have to sit out a portion of the 2006-07 season. Jarrett ultimately avoided punishment and was the 45th pick in the 2007 NFL draft. After a disappointing season, Jarrett was arrested on March 11, 2008 and charged with driving under the influence.

* In August of 2006, USC defensive back Brandon Ting quit the football team after reportedly testing postive for steroid use. His twin brother, Ryan, also a defensive back on the USC football team, quit the team just days later, claiming that he wanted to concentrate on preparing for medical school, and was never tested. Interestingly, Arthur Ting, father of the twins, is a Bay Area orthopedic surgeon who has reportedly appeared as a witness before a grand jury considering possible perjury charges against baseball's Barry Bonds, one of Arthur's clients. This incident finally triggered some real interest by the LA Times.

* On October 16, 2006, it was announced that then 14-year-old high school freshman Dwayne Polee Jr., who had yet to even play a game at Westchester high, had verbally committed to USC’s basketball team. Though not improper, the early commitment was unconventional, and was repeated in June 2007 when USC announced the verbal commitment of 14-year-old middle school player Ryan Boatright, who, at the time, had not yet even decided upon where he was going to high school. Further eyebrows were raised in June 2007, when USC hired Dwayne Polee Sr., father of Dwayne Polee Jr., as Director of Basketball Operations, amid charges of nepotism.

* In January 2007, a federal investigation into extortion claims by former USC running back Reggie Bush and his family revealed the existence of taped converstations that could confirm Bush took cash and gifts while he was playing football for USC. It was also reported that nearly $280,000 in cash, rent and gifts were allegedly given to Bush and his family. The information came to light following the issuance of grand jury subpoenas to multiple witness by the U.S. District Attorney's office in San Diego. Both the NCAA and Pac-10 continue to investigate. Also, more recent articles suggest that Reggie Bush was involved earlier and more deeply than previously reported in efforts to create the sports marketing agency at the center of the continuing controversy. The investigation has, to date, yielded no definitive proof that USC officials had knowledge of Bush's misconduct, though Bush was nevertheless asked not to attend the Trojans' Rose Bowl matchup against Michigan on New Year's Day.

* On February 2, 2007, it was reported that a "stampede of student athletes," including three USC linemen, ex-USC receiver Keary Colbert, and members of the USC women's basketball, volleyball and water polo teams, had improperly attempted to take an academic shortcut around the university's foreign language requirement by signing up for a course at Los Angeles Trade Tech College taught by USC graduate Senora Ross, who promised to give the athletes no lower than a "B." Upon discovering the situation, USC officials disallowed the transfer of credits from Trade Tech.

* On February 9, 2007, USC compliance officials announced they were investigating whether an NCAA violation occurred during the Trojans' pursuit of Louisiana prep star running back Joe McKnight. The investigation followed reports that McKnight had told reporters that USC coach Pete Carroll had set up a conference call so he and high school coach J.T. Curtis could be assured by ex-Trojan running back Reggie Bush that USC would not be punished for a separate NCAA investigation into improper benefits allegedly taken by Bush. Carroll later denied that any call took place, and Curtis said that McKnight misspoke. According to NCAA officials, if USC got Bush's help in recruiting McKnight, it would be considered a "secondary violation" of recruiting rules.

* On April 14, 2007, it was announced that Percy Romeo Miller, also known as Romeo (and formerly Lil' Romeo) had been offered a basketball scholarship to USC. The scholarship offer, to a 5-foot-10 point guard with a bad knee who had never played a full season of high-school basketball, was roundly criticized by national commentators as a thinly veiled attempt by USC to obtain the commitment of Miller's friend, prep star and NBA prospect Demar DeRozan, while ignoring Miller's mediocre at best talent.

* In the first week of August, 2007, there were new developments in the NCAA investigation of former USC running back Reggie Bush, when it was reported that audio recordings that allegedly establish an improper financial relationship between Bush and a would-be sports marketing agent were played for NCAA investigators. The tapes were revealed after Lloyd Lake, a partner in failed sports marketing agency New Era Sports enterprise, filed a lawsuit against Bush and his family, seeking to recoup nearly $300,000 in benefits Lake claims he helped provide. Lake's allegations were further detailed in January 2008, with the publication of Don Yaeger's book Tarnished Heisman, which chronicled various allegations swirling around Bush's USC tenure, including claims that Bush received $47,000 out of an overall $291,000 that went to his family from sports marketer Lake. That same month, published reports contained Lake's (unsubstantiated) allegation that USC coaches knew Bush was taking money in violation of NCAA rules.

* In early November 2007, USC forward Davon Jefferson was suspended for the team's embarrassing season-opening loss to Mercer. Jefferson, who required two years to meet the NCAA's minimum academic requirements and was kicked out of prep school before he joined USC, was also later benched for much of a narrow loss at Stanford and also suspended for a loss to Washington State. After clashing with Floyd, Jefferson did not even inform the school of his decision to turn pro.

* On January 21, 2008, USC freshman guard O.J. Mayo was alleged to have violated NCAA rules by accepting complimentary tickets from Denver Nuggets forward Carmelo Anthony to a Lakers-Nuggets game at Staples Center. Coach Floyd subsequently took the blame, and Mayo was ultimately required to donate the value of the tickets to charity.

* On April 6, 2008, USC sophomore tailback Joe McKnight was held out of the team's scrimmage and it was announced that he would miss the final week of spring workouts because he was academically ineligible to participate. McKnight had dropped a class, leaving him without the 12 units required for eligibility.

* On May 2, 2008, the judge in the civil litigation between former USC running back Reggie Bush and Lloyd Lake ordered the parties to appear in June 2008 for their depositions, and denied Bush's attempts to impose a "gag order" to prevent the deposition transcripts from being shared with the NCAA. The judge also set a trial date of March 13, 2009.

* On May 6, 2008, it was announced that USC's men's basketball team was the only major athletic program in the Southland penalized with scholarship losses as the result of a poor performance in the NCAA's academic progress rate. The Trojans were penalized in part because Lodrick Stewart, Nick Young and Gabe Pruitt stopped attending class after the 2007 season, and because three players transferred within the same season. USC's APR score of 804 was 121 points below the minimum-acceptable mark, and stemmed from various academic problems, including Gabe Pruitt's academic ineligibility for the fall 2006 semester, and his ineligibility again following the spring 2007 semester. USC served the penalty during the 2007-08 season.

* On May 13, 2008, ESPN aired an episode of Outside the Lines that contained extensive, well-documented allegations that USC guard O.J. Mayo received improper benefits from a sports agent (BDA Sports) and that agent's runner (Rodney Guillory) both before and during his one season at USC. It was alleged that Guillory received benefits in excess of $200,000, while Mayo received $30,000 in benefits, including cash, clothes, cell phone service, and a flat screen television for his dorm room. USC immediately faced a storm of criticism, with several prominent commentator calling for sanctions, including the so-called "death penalty." The criticism of USC intensified as it was reported that Guillory was given largely unfettered access to Mayo and the athletic department, after a highly unusual recruitment process, despite USC knowing of his involvement with agents, including a prior scandal with USC's Jeff Trepagnier, for many years. The Pac-10 and the NCAA have launched investigations. Developing.

I redacted all of the criminal charges and allegations at USC, as well as the incidents (like O.J. Simpson and Suge Knight at games and practices) that paint a better picture of the thug culture being cultivated at SC. I only included the potential NCAA violations.

The two highest profiles athletes at USC in the past 5 years are embroiled in full scale investigations into improprieties, and there have been several high profile recruiting stories that paint a picture of questionable practices.

I have always said that the USC rivalry with Notre Dame is one of the best rivalries in all of sport. However, since the beginning of the Carroll era, the rivalry feels more like the Catholics vs. Convicts rivalry with Miami in the '80s than the glory days of the John McKay era of the 70s.

I hope that USC is punished for their wrongdoing, but only enough to bring about a regime change in the administration and leadership - I don't want such an illustrious and successful program brought to its knees. But I also haven't seen a better picture of "lack of institutional control."
Posted by Wacko at 4:20 PM 5 comments: