This week's Irish Blogger Gathering is hosted by Charlie's Nasties.

1. With all of the recent injuries, what scenario would you rather have? Option A: Dayne Christ out for the season, Trevor Robinson out indefinitely with an ankle sprain and Jimmy Clausen suffering week to week with turf toe OR Option B: All of the above players are 100% and Floyd is out for the year?

It's no question I'd take Option A. Turf toe is painful (I actually got the same injury two days after Jimmy did) but you can work through it. Crist is our 2nd string QB, and our 3rd stringer has actually started games for us. And Trevor Robinson, while very good, is not irreplacable, as we are very deep along he O-line.

Michael Floyd, however, completely changes this offense. Last year, with Floyd out, the offense struggled mightily, and we lost both games. This year, Floyd was out at the end of the Michigan game, a loss. And he didn't get to play against USC, our only other loss. One could legitimately make the argument that if not for Floyd's injury, we would be undefeated and in the thick of the national title picture.

Now don't get me wrong - Golden Tate is amazing. But just think what he would be doing if they couldn't triple team him every play.

Now, the only way I'd choose option B is if you look at the possibility of a medical redshirt, and you know that all of the players are going to use every ounce of eligibility left to them. I'd rather have Michael Floyd here to help with the transition from Clausen to Crist after winning the title next year. But, it's unlikely that Floyd will be able to stay out of the draft after next year. 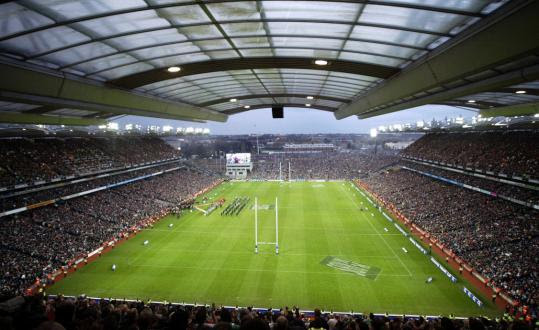 2. After experiencing our first neutral site game at San Antonio this week, it got me thinking about our upcoming off site game against Navy. What are your thoughts on playing Navy in Ireland in 2012? Should the 7-4-1 model take us abroad?

I'm already in the planning stages to take a very large contingent of my friends to Dublin for this game. I've never been more excited about a Navy game in my entire life.

Sure, it has a couple of drawbacks. However, watching the Fightin' Irish play in the homeland of the Irish has got to get you fired up.

3. Navy's unique offense and personnel always seem to test the Irish in some ways that other opponents don't. What position matchup are you most looking forward to this weekend?

I'm lookng forward to Manti Te'o's relationship with Ricky Dobbs. The key to stopping this offense is to play sound, fundamental assignment defense. And, the best way to disrupt this offense is to get negative plays on first down, taking them out of their comfort zone. With Te'o's athleticism, I'm expecting him to have a career game in tackles, especially tackles for loss. If nothing else, he can force the early pitch, keeping the tailback from getting to the edge.

4. The Navy football stereotype is generally that the players are undersized and have less star power, but by emphasizing the fundamentals, minimizing mental errors, and playing as a team, they are always able to put up a fight. What position or player on Notre Dame's roster do you think could benefit from approaching games with this attitude? 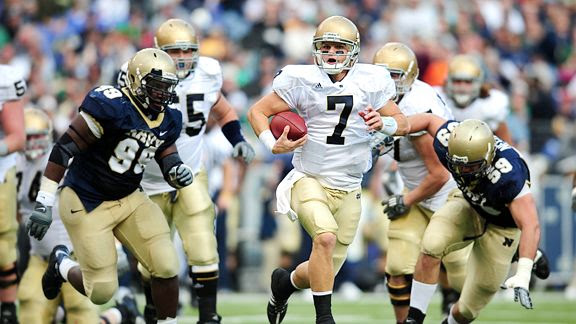 The obvious answer here would be cornerback/safety play in the zone defense. We have had serious issues with passing coverage from zone to zone. There is a clear lack of communication there, as there are too many miscues. If the defensive backfield could play as a unit and count on each other to cover their assignments, this team would be unstoppable.

5. Everyone in the country saw that Navy took #6 Ohio State down to the wire in the opening week; how will the Midshipmen fare against the Irish? Predictions please.

Unlike the Buckeyes, the Irish face this Navy offense every single year. The experienced players know what's coming, and have practiced against it several times before. Also, the strength of our defense all year has been rush defense.

The key here will be how the Irish matchup against Navy on first down. If we can stop them for little or no gain, or even get a loss, this offense will struggle to move the chains.

Also, I'm excited to see what this offense looks like with Michael Floyd back in the lineup. Robby Parris is also healthy, so we now have 7 receivers that have shown the ability to be productive. And a potential All-American tight end on top of that. Not to mention the guys that can catch the ball out of the backfield. So many weapons to try to defend.

My prediction is that we'll have success in shutting down the potent Navy rushing offense, but because of the very nature of their offense, they may be able to keep things close. If we have early success and can build a substantial lead, this game could become a blowout. But, this is Navy, and they never say quit. We need to flex our muscles on defense and play for 60 minutes.

Go Irish! Beat Midshipmen!
Posted by Wacko at 9:22 AM 3 comments: