A couple of years ago, one of the ESPN guys did a list of the "scariest" college footballs stadiums. Then went on to list the usual suspects, with no clear rationale.

I think "scary" is the wrong word to use, though, when considering home field advantage. So, with that in mind, I'm going to attempt to put together the most intimidating places to step onto the field. This is, of course, from the perspective of the player, not opposing fans.

There are plenty of factors to consider when considering which stadium is the most intimidating. Size, volume, history, relative closeness to the fans, and the sheer awe-inspiring quality of the venue.

Now, to be fair, I'm considering each of these stadiums at their best - not the week-in, week-out drudgery of the season. I mean, with the exception of very few places, no fan base is going to be crazy every week. And the higher caliber of opponent, the more crazy the stadium is likely to be.

There are certain places where history weighs down like a mantel. In sports, there is usually one or maybe two stadiums - that tower above all the rest as being truly legendary. Wrigley. Fenway. Lambeau. Madison Square Garden. Notre Dame Stadium.
When you are standing in the tunnel under those 11 Championship banners, looking out an the eleventy-bajillionth straight sell-out crowd, listening to the chants from the most dedicated student section in the country, you can feel the echoes waking up. And while Notre Dame has gotten some flack for not being loud on a week-in, week-out basis, believe me when I say that they really can shake down the thunder like none else. 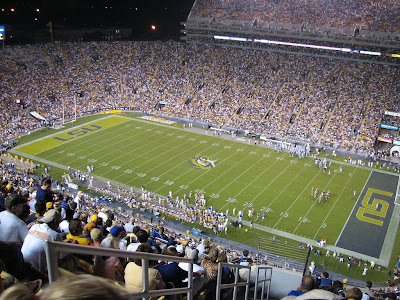 First of all, with a name like Death Valley, you expect a certain amount of intimidation. And when you load up Death Valley with a bunch of intoxicated Cajuns, this place gets all kinds of loud. The design, a full bowl with the giant upper decks on either side, keeps it all inside where it belongs. Mostly, though, this stadium is as high as it is by reputation as one of the toughest places to visit - there is no single defining factor here. 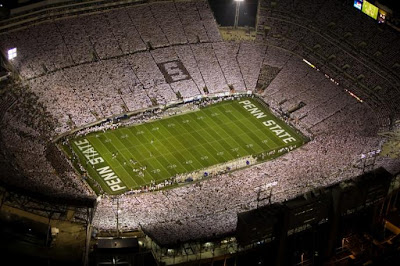 You want intimidating? How about walking out into a sea of 107,000 people all dressed in white, screaming their damn heads off? Penn State has not only the largest capacity of any college football stadium, but also is designed for intimidation. The double tier towering over the north end zone is just plain scary. 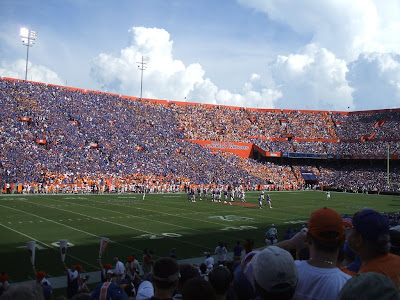 Yes, Florida fans are loud and obnoxious. And yes, this stadium has a large capacity. But what really makes this stadium intimidating is the design. The steep design makes you feel like the entire stadium is about to collapse in on top of you.

This stadium has the best of all worlds, and I'm amazed that it doesn't come off as intimidating. I think it's a function of the Tennessee fans - some of the nicest people I've ever come across when they come to visit us at Notre Dame. The double tiered bowl all the way around, along with the seating capacity of over 104,000, make this a natural fit for the loudest stadium. But volume isn't everything, and so Neyland sits at #5. Nearly as rich in history and tradition as Notre Dame, Alabama's Bryant-Denny stadium certainly fills with some of the most passionate fans anywhere. But Bryant-Denny really suffers in intimidation factor due to the design. The open end on one side doesn't allow for the clutch goal-line intensity you get in some of the other stadiums (particularly Beaver Stadium, with the 3 tiers, and Notre Dame, with the student section screaming in your face).

Two words: "Enter Sandman" Sometimes, not having the storied tradition can help. 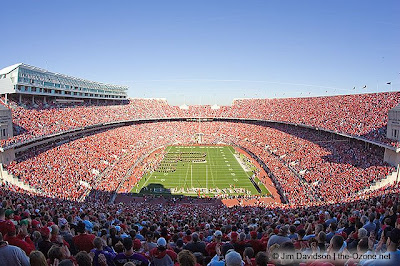 The double-decked horseshoe of Ohio Stadium makes for one end-zone that is insanely loud, and one that is, well, not. But, the Horseshoe is also one of those legendary stadiums, and so they get a boost for that as well. 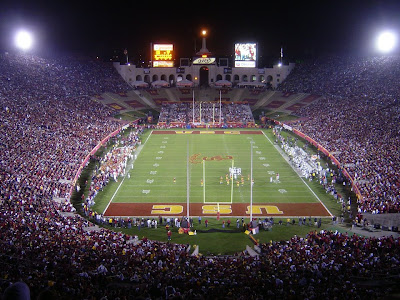 Design-wise, the Coliseum is one of the worst in terms of creating noise level or making the fans seem like they are on top of you. But, the impressive visuals of the stadium, and the fact that they have one hell of a football team, help with the intimidation factor. Lighting the Olympic Cauldron in the 4th quarter is pretty impressive. 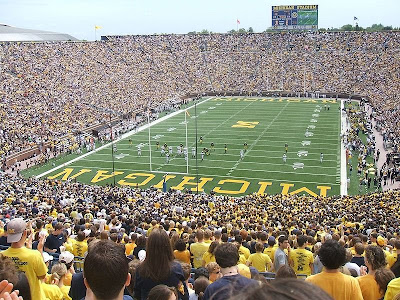 Although Notre Dame Stadium is loosely based on Michigan's design, Michigan Stadium is flatter and larger than ND, creating a stadium where you may have 107,000 screaming fans, but the noise gets lost at field level because of the design.
Posted by Wacko at 11:17 AM 15 comments: