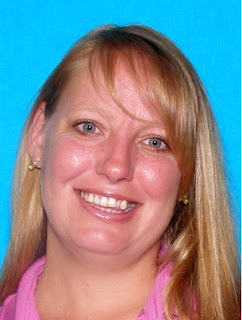 I was shocked and deeply saddened by the news today that a good friend of mine, Donna Maximenko, was found dead early this morning. She had been missing since last Wednesday.

For those of you that don't know Donna, she was a bartender at the Linebacker Lounge for many years, and was one of the nicest people you could ever know. If you've ever been in the Backer for a drink over the last decade, chances are you bought your drinks from Donna, and she was truly one of the best people I've ever had the pleasure of meeting. Even when work was crazy and frustrating, she was quick with a smile.

I remember that one of the first times I met Donna at the 'Backer, she gave me one of those wooden coins that was good for a free drink, with her autograph on it. She made me promise never to use it, because she was going to be famous someday.

Many of us in the South Bend/Mishawaka/Notre Dame community are absolutely crushed by this deeply sad news, and I hope that you will take a minute to say a prayer for all of us that are left behind to mourn her passing.

Nights at the 'Backer will never be the same.
Posted by Wacko at 12:11 PM 3 comments:

I tweaked the system a bit from my last posting, as I had the Big 12 and SEC playing too soon in my older version. I like this one better.

Here is how my system would play out for this season, with my picks (or actual winners) in bold:

Week 1: Championship Week
- require all conferences to have a championship game
- this is the first round of the playoffs, championship losers are out (but are free to play in a lesser bowl game if they choose)
- All at-large spots are filled first according to record, and then according to ranking.

Independence Bowl: Independent/BCS at-large Texas vs. Non-BCS #1 Utah
Storyline: After the pollsters decided to launch Oklahoma over the Longhorns into the Big 12 Championship, Texas gets their chance for redemption by playing one of the only undefeated teams in the country.

SNUBS: Ball State could have complained about being snubbed here, but then they went and lost their conference championship, leaving them with one loss, to Buffalo. Had they won, they would have gotten into the at-large pool over Texas, by virtue of a better record. Next highest ranked team without a shot? 10-2 TCU. Are the Horned Frogs really getting screwed? They lost to two of the tourney teams - Oklahoma and Utah - they could have played their way in.

Second Round
- played over Christmas week

Gator Bowl: Independence Bowl Champion vs. Big 12 Champion
Texas vs. Oklahoma
Storyline: Texas already beat Oklahoma on a neutral field once this year. Can they pull it off again? Not this time - OK wins 63-62 with a walk-off TD as time expires.

Fiesta Bowl: ACC Champion vs. Big 10 Champion
Virginia Tech vs. Penn State
Storyline: JoePa gets his chance to make a run at the title, and begins by dispatching the ACC champ.

Rose Bowl: Fiesta Bowl Champion vs. Orange Bowl Champion
Penn State vs. Southern Cal
Storyline: The granddaddy of them all gets their traditional Big Ten - Pac-10 matchup, on New Year's Day. Is anyone complaining?


Championship game (played the week after New Year's, just like it is now):

This system allows the remaining bowl games to remain in place, comprising the teams that are bowl eligible that did not get into the playoffs and the championship week losers.

The games are all played during traditional bowl times, except some New Year's bowls are being moved to Christmas week. The other bowls could be used to fill up the season between Championship week and the second round, as they are now. I'd also move up the bowl eligibility to 7 wins - no need to reward mediocrity, and that way there aren't too many bowls to clutter the schedule.

There are no complaints from non-BCS schools, as they get two slots (from five conferences). There may be some complaints about who gets the at-large BCS slots, but this system had the same number of at-large spots this year as the BCS bowls did. This allows the team that didn't win their conference but were really good (ala Texas and Texas Tech) to get a shot at the championship. And because record matters more than ranking or conference affiliation, the Big 12 get 4 teams in.

And, most importantly, it gets decided on the field.

Now we just need to make it happen.
Posted by Wacko at 9:57 AM 4 comments:

Projection opinion: "A winnable game in beautiful Hawai'i, which happens to be the home state of a certain linebacker the Irish have been courting in this year's recruiting class. A very winnable game and a beautiful venue. If the Irish are looking primarily to end their bowl winning streak, this would be the game I'd choose. A low payout, however, may make this less attractive."

Although the message boards have been aflame with complaints about the Irish accepting this bid, I think that it was the best bid available. I'm going to address the complaints of the message board posters, and I'd like to hear your responses as well.

Complaint 1: "You don't reward players for a 6-6 season."
While I agree that rewarding mediocrity is questionable, the fact remains that if the Irish decline a bowl bid, another 6-6 team will take it. These are the rules of the game, and we need to take advantage of the rules. Declining a bowl bid would be like running an extra pass play when the rules say you can run out the clock and win the game. This young team will get an extra month of practice, and has a golden opportunity to put this bowl losing streak to bed for good.

Complaint 2: "ND should not be playing a game on Christmas Eve or Christmas Day. Christmas is the second-holiest time in the Catholic calendar, and is supposed to be about family."
Now just wait one cotton-pickin' minute here. The Irish have played on New Year's Day numerous times, and New Year's Day is a holy day of obligation. But I don't hear anyone complaining when we play in the Gator Bowl. And Christmas Eve is not a holy day of obligation. It's just the night before the holy day.
And further, I don't know very many true Irish fans (alums in particular) for whom Notre Dame football is not part of their family tradition. In fact, I would love to be able to sit down with my family and watch the Irish on Christmas Eve, while we sip egg nog by the fire and get ready for Christmas Vigil mass. I can't think of a better time. Ratings are going to be huge, as people are going to be sitting at home anyway with family. It's going to make Christmas Eve this year feel a little bit like Thanksgiving.

Complaint 3: Nobody can afford to go to this bowl game.
Now, this complaint is just ridiculous. For the fanbase and alums of one of the nation's greatest universities to complain about not being able to afford a plane ticket to Honolulu is ridiculous.
Can I afford to go to the game? No. But then, I'm just starting out on my career. There are plenty of well-off fans and alums that will buy the plane ticket to Hawaii for Christmas. There is zero chance that the Irish don't sell all of their ticket allotment. In fact, we travel so well, I'd be willing to bet that the majority of the fans in the stands will be Irish fans, despite the fact that this is essentially a home game for the Hawaii Warriors. This is just sour grapes from the people that wanted to be able to go to a closer game like the Texas Bowl.

Complaint 4: Spending a million dollars to fly the team out to Hawaii sends a bad message in these troubled economic times.
Make no mistake, Notre Dame will make money this bowl season. The costs of flying the football program to Hawaii are far outweighed by the financial boon the Irish will get from playing in a bowl game. The payout from the bowl game may not cover the costs, but the exposure for their sponsors and the money from the BCS deal will still keep the program in the black this postseason.
And as far as messages go, this complaint seems to imply that they should just cancel the Hawaii bowl. Heck, why not cancel all of the bowl games?

The Hawaii Bowl was the best option available to the Irish this bowl season, and I am glad that the powers that be at Notre Dame recognized that the Texas Bowl against Rice had no positives for the University. Worse, nobody would have been able to watch that game, as it's on the NFL network and on a Tuesday night, nonetheless. I don't know about everyone else, but I'll be home on Christmas Eve, and won't have to work the next day. I can watch the game, go to Vigil Mass, and then enjoy my Christmas morning. On Tuesday the 30th, I'd have to work all day, then try to find a bar to watch the game at (I don't get the NFL network), then try to get back home and get some sleep before I work the next day.

I applaud the University for ignoring the punditry that attempted to relegate them to a worthless bowl game against Rice, and instead accepted a bid that provides a great atmosphere for the Irish to end their bowl losing streak and set up for next year.

Plus, it's basically a free recruiting trip for the entire team, coaches on down, to go out and recruit Manti Te'o for a week.

Maybe the Weis family can get an invite to the Te'o household to celebrate Christmas Day.
Posted by Wacko at 7:32 AM No comments:

Inspired by a posting on Rock's House, I thought I would post my hate list - the list that determines my rooting interest in every game that doesn't involve Notre Dame.

For example, as much as I hate Florida, the thought of Alabama getting another National Championship made me feel sick to my stomach. So, last night (although secretly wishing for some kind of cataclysmic destruction of the entire stadium) I rooted for the Gators, something I would almost never do.

The following list ranks my relative level of hatred for all of Division I Football Bowl Subdivision. By using this list, you can precisely determine who I will be rooting for in each bowl game this year. The higher on the list, the more I want them to lose. Therefore, there is no possible way I would ever root for Miami. Just won't happen. And if teams in my top 10 play each other, I just root for the proverbial asteroid to destroy the stadium.

The order changes slightly for basketball.