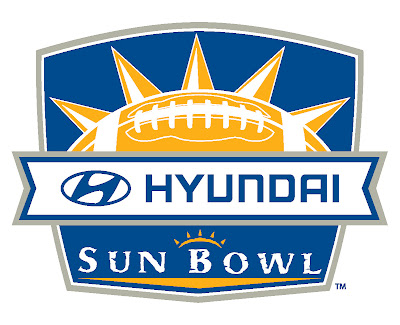 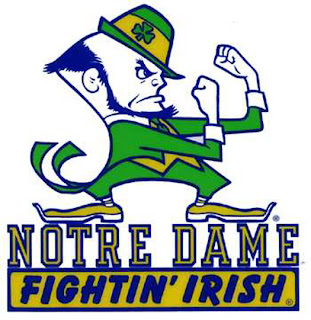 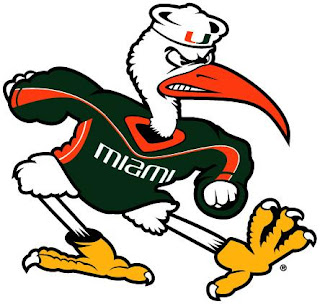 
One of history's great rivalries, lain dormant for 20 years, will be rekindled on New Year's Eve. Should auld acquaintance be forgot, this rivalry should take you back to the 1980's. So put on some Ray-Ban sunglasses, tease out that hair, and lets take that Miami-Vice jacket and pastel T-shirt into the way-back machine...

The Notre Dame Fightin' Irish under Lou Holtz were a perennial powerhouse and proud representatives of history's greatest team, the pinnacle of amateur sport. 10 national titles, 6 Heisman trophy winners, more All-Americans than any other school, and a decades long history of being able to balance excellence on the athletic fields with excellence in the classroom and a commitment to religion and faith that never wavered. The Irish under Holtz would add another Heisman and another National Title before he left the school. Indeed, they could have added 3 of each.

However, "Da U," as they like to call themselves (likely due in part due to their inability to spell the word University), was the nouveau riche of the college football world. Having spent most of their existence as a doormat in college football, they actually considered dropping the sport. But then Howard Schnellenberger came along and changed the course of history. Unable to recruit with the Notre Dames, Michigans and Texases of the world, Schnellenberger decided to try and attract a new element to his team: the thug. Turning to the Florida ghettoes, the results were instantaneous and powerful. In his final year at Miami, they won their first national title in '83. Then, Jimmy Johnson showed up. Otherwise known as pig-faced Satan, Jimmy Johnson added fuel to the fire of the thug culture in South Beach, embracing it wholeheartedly. The hip-hop culture, racial tensions in Miami at the time, culture of criminality and unbridled success led to an intimidating swagger that da U brought with them wherever they went.

And it was under those circumstances that this bitter rivalry was born. During the late 80s, the Notre Dame - Miami game decided the national championship on a yearly basis. More than that, though, it was the quintessential matchup between good and evil. Catholics vs. Convicts South Beach arrogance, swagger, criminality, blatant disregard for recruiting rules, and a downright mean streak exemplified the Hurricanes. Class, honor, integrity, and winning the right way exemplified the Irish.

And now, nearly a quarter century after that rivalry burnt out in spectacular fashion, these two old bitter enemies square off again. This time, there are no National Titles on the line. Both programs are struggling to pull themselves out of an extended period of mediocrity, and the U is also trying to dig out from their inglorious reputation as college football's bad guys. (Thankfully, they now have USC, Florida and Ohio State fighting for the honors in that battle)

But both programs are on the verge of a new start.

The Irish, in their first year under new head Coach Brian Kelly, have fought through an extreme amount of adversity this season, but emerged in November as a stronger team for it, thoroughly dominating their final three opponents behind a vicious defense, a strengthening running game, and the slow development of a true freshman quarterback.

The 'Canes, having fired head coach Randy Shannon, are preparing for this bowl game under interim coach Jeff Stoutland. New head coach Al Golden is busy putting together a staff to build for next season. Miami has a lot of talent, and have been excellent pass defenders. However, they've struggled against the run. On offense, they are actually a little more run-heavy than Miami teams of the past, rushing for an average of 190 yards per game, while throwing for about 232 yds/gm. The lost a close game to Ohio State early in the season, and got blown out by Florida State and Virginia Tech. However, it was the loss at Virginia and at home against South Florida that cost Randy Shannon his job.

So here we are, two 7-5 football teams preparing to do battle in what should be a very emotional game for both teams. The needle appears to be pointing up for the Irish, who have been playing their best football in years down the stretch, while the Canes appear to have been backing their way into the bowl season.

On paper, I think Miami is better than Notre Dame. The Irish are without the services of their #1 QB, #1 TE, and #1 RB. They have a true freshman under center. Miami is relatively healthy, with Junior Jacory Harris leading the offense.

However, all of the intangibles point to the Irish. They are on a hot streak, and Kelly's system of conditioning and up-tempo practices have this team performing better than they have all season. The Canes are in a coaching transition, so the schemes they will be practicing will have limited value to them next season.

This game means more to the Irish. The Canes can lose, blame it on the transition, and then move forward with their new coach. If the Irish lose, a bitter taste is left in the mouths of the Notre Dame faithful, who still feel the sting of being demolished by Navy and losing an inexplicable game to Tulsa in the wake of the Sullivan tragedy.

Ultimately, I think the Irish get the edge here, as Coach Kelly's consistent approach to preparing his team, along with the weeks of preparation, make the Irish as well prepared for a football game as they've been in years. This team has steadily improved all season, and I expect them to come out and give a dominating performance. Miami's defense will keep them in the game, and Jacory Harris is plenty dangerous. But ultimately I don't think that Miami will have an answer for this defense, particularly on the ground. Standout sophomore Manti Te'o will be the player of the game in a contest marked by strong defenses.