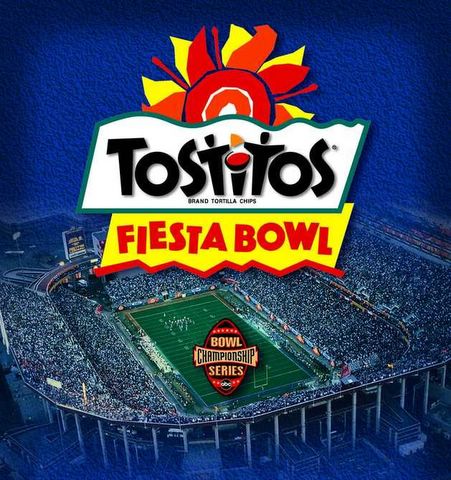 See you in Tempe!
I got tickets throught the Student ticket lottery, and my gracious in-laws gave me enough frequent flier miles for Christmas for me to fly out. Look for the crazy green guy with some big goofy sign. Details to follow.
Posted by Wacko at 3:34 PM 2 comments:

In college football awards, hype and bias often outweighs actual performance, and Notre Dame players got snubbed in three of the top awards this year.

At the Home Depot College Football Awards show this year, Notre Dame got snubbed in every category they were nominated in.

The Davey O'Brien Award, which goes to the Quarterback of the year, went to Vince Young of Texas. Vince Young had a spectacular year this year, and is deserving of consideration for this award, leading the nation in pass efficiency rating.
However, Brady Quinn had a higher completion percentage, yards, touchdowns, total offense, and lower interceptions. Young benefitted from a weak schedule and an offense that used Vince's legs as much as his arm. And his team went undefeated.

The Biletnikoff Award goes to the Receiver of the Year, and was awarded this year to Mike Haas of Oregon State. In a situation opposite the O'Brien Award, Haas won because his team sucked, and was playing from behind much of the year, and he was their only weapon. He led the nation with almost 140 yards per game. However, he didn't do much to help his team win - for all those yards, he only had 6 touchdowns. Jeff Samardzija, on the other hand, tied with Dwayne Jarrett of USC (another finalist) for the most touchdowns this season with 15, and finished with 108 yards per game (10 yards/gm ahead of Jarrett). He also wasn't the only target on his team, as he had to share catches with Maurice Stovall as well (93 yds/gm, 11 TDs).

Another snub this year was from the Heisman trophy, which hasn't even been awarded yet. I'm not saying that Brady should win it, as Reggie Bush made it clear that he is head and shoulders above the rest of the country. However, Leinart's 2004 Heisman and Young's undefeated record bumped them above Brady, even though they had worse numbers. I could deal with all of that. However, every year, the Heisman invites the top four or five finalists to the award ceremony. For no apparent reason, the Heisman trophy decided to pare down the list of invitees to only three this year, leaving Brady Quinn at home.

The worst snub, however, came from the Walter Camp Foundation All-American team. Instead of choosing Quinn or even a worthy Vince Young for Quarterback, last year's Heisman mesmerized them into picking Leinart as teh first-team QB.
Worse than that is the receivers. There are two receivers chosen at receiver, and Walter Camp chose to choose Dwayn Jarrett as their second wideout.

With the exception of being thrown to more (not catching a higher percentage, though), there are NO statistical categories that Jarrett led Samardzija in. Zip. Zero. Zilch. He managed to tie him in touchdown catches, largely due to Coach Pete Carroll's tendency to run up the score. USC beat teams by 53, 47, 46, 42, and 30 points this year. Coach Weis, on the other hand, called off the dogs as soon as the Irish got up by three scores, CHOOSING never to beat their opponents by more than 24 points. (he had opportunities to do so 7 times this year).

Some other snubs include Brandon Hoyte not finishing as a finalist in any defensive awards, Fasano not winning the Mackey Award (won by UCLA player), and that Coach Weis' amazing turnaround of this team was overshadowed by JoePa ressurecting a team that HE had killed in the first place.

Hopefully, Coach Weis will use these snubs to motivate the team into kicking the tar out of the Buckeyes this year in Tempe.
Posted by Wacko at 2:43 PM No comments:

This took me a while to put together, so humor me and at least click on the link:

The BCS rankings accidentally got the matchup right this year, an undisputed #1-#2 matchup between USC and Texas.

This does not mean, however, that the process is without controversy. For the first time, the final coaches poll ballots of each coach were revealed. [The ESPN/USA Today poll is composed of 62 current college head coaches] The bias and outright hypocrisy in the system became evident.

The closest thing the BCS has to a controversy is that a 9-2 Notre Dame team got into the BCS with an automatic bid, but 10-1 Oregon did not.

Looking at the final coach's polls, it wasn't for lack of trying by the Pac-10. With the exception of first year head coach Walt Harris (who had the Irish at 5th), the Pac-10 coaches dropped Notre Dame in their rankings and inflated the Ducks to try and squeeze out some of the $14.5 million payout from the Fiesta Bowl for themselves.

The SEC, hoping to get a 9-2 Auburn team in the mix and inflate Georgia's ranking, did the same thing. Phil Fulmer, who actually played ND and got spanked, and Sylvester Croom, whose ballot seemed more concerned with inflating SEC schools than deflating other schools, had the Irish ranked close to normal (5 & 6, respectively):

The SEC is the worst offender as to incredulous rankings. Houston Nutt had West Virginia, a 10-1 BCS conference champion unranked. He had 7-4 South Carolina, sixth in the SEC, ranked 25th. Steve Spurrier dropped Notre Dame down to 14 (the lowest ranking ND received from any coach), while inflating his barely-bowl-eligible team to 21st.

Interestingly, the only coach that Notre Dame faced this year that ranked the Irish lower than 6th was Tyrone Williingham (talk about an agenda). Carr ranked us 6th, and the other teams we played all ranked us 5th.

As a matter of fact, over half of the coaches that voted placed us at or above 5th. Fourteen coaches with an axe to grind against Notre Dame dragged them down to 6th.

Some examples:
Bob Stoops of Oklahoma, who used to be the highest paid coach in college football and wants to believe that Oklahoma is the most storied program in college football with their 12 claimed championships. Problem is, if Notre Dame counted National Championships the same way Oklahoma does, we would have 18 championships, instead of the 11 consensus championships we actually claim.
Tom O'Brien of Boston College, who is bitter that Notre Dame discontinued their series after BC bolted the Big East for the ACC, then accused Notre Dame of dropping BC 'cause they don't like losing. In fact, the Irish dropped them for unsportsmanlike behavior (trashing the visitor's locker room) and lack of conference loyalty (ND is Big East in everything but football).
Tyrone Willingham of Washington, who wants the Irish to fail miserably without him, to prove that his coaching was the only thing giving Notre Dame any credibility. His bitterness is almost palpable.
Larry Coker of Miami, the Notre Dame - Miami (Catholics v. Convicts) hatred is strong. Despite winning so much over the past two decades, Miami still can't fill its stadium and is constantly in trouble with the NCAA for recruiting violations and player misconduct. The Irish, however, have a national following and pristine reputation regardless of record, although the Irish still are effectively tied with Michigan for winning percentage.
Joe Tiller of Purdue, who hates the entrance of Charlie Weis into the recruiting area. The Irish have already signed the Gatorade Players-of-the-Year from Indiana, Illinois and Ohio, as well as the top 2 running backs in Indiana. The Boilers have yet to get a commitment from a top 15 Indiana recruit.

Screw the rankings, why not have a playoff?
Posted by Wacko at 11:22 AM No comments: