So, life has been hectic as ever lately, with multiple business and personal trips sandwiched around moving offices and buying and moving into a new home.  Things still won't settle down properly for a few more weeks, but with all of the turmoil in college football, I had to weigh in with my thoughts.

Pretty much as I expected, the sanctions reported from the NCAA were little more than a slap on the wrist.  A 2-year post-season bowl ban, a reduction of approximately 20 scholarships, and vacating wins from 2004 (their championship season).  This is almost exactly what Alabama got for their 2000 violations.

Is it going to hurt recruiting?  Yeah.  Are they going to spend a couple years as a mediocre team?  Maybe.  But what really bugs me here is that Alabama has already proven that this is little more than a speed bump.

You want to achieve compliance?  Give these sanctions some teeth.  Now, I'm not proposing that we hand out the death penalty like Chiclets, here.  Having USC as a relevant program is healthy for college football.  However, the NCAA needs to send out a clear message that if you get involved in cheating and paying players, you are going to suffer.

My proposal?  A 4-year postseason ban.  Think about how tough that will be to pitch recruits this year.  "Hey, Mr. 5-star.  Come on down to Hollywood, where you can see all the glitz and glamour and hang out with Snoop Dogg.  Oh, but there's no way you'll win a championship, unless you stay for a 5th year.  I mean, we could win every game you play, but have nothing to show for it."

It's not the death penalty, but it will create a recruiting vaccuum similar to the one Notre Dame suffered by Willingham's incompetence.  Having to rebuild the team from that kind of blow is a significant challenge, and creates a financial disincentive that would actually have some impact.

Right now, all Coach Cheatie McKiffin has to tell some kid is "Hey, bud.  You'll probably sit back in the depth chart for the first couple years anyway, so when you hit your junior and senior years, we'll be poised to blow it up.  Also, since we can't play in the postseason anyway, we can spend those two years playing young kids like you and priming us for a run at the championship and the start of another dynasty.  Here's your Escalade and the keys to your penthouse suite.  The Playboy bunny should be there waiting for you."

Once again, the NCAA disappoints.  Shouldn't have expected anything else.

Okay, so things are really starting to heat up, with the Pac-10 now getting into the mix and adding fuel to the fire.

Here's where we stand, according to the current media reports:

The Pac-10 has offered not only Colorado, but also Texas, Oklahoma, Oklahoma State, Texas Tech, and Texas A&M.

The consensus right now, is that we are most likely looking at:

This will prompt the Big Ten to add 5 total teams, expanding to 16.  Nebraska's already in.  Missouri is chomping at the bit.  That leaves 3 more schools. So begins the debate over who else they will add, and where does this merry-go-round stop?

Here are the possibilities, conference by conference:

Of course, we're going to be the first name out of everyone's mouth,  Everyone knows that we're the big fish that the Big Ten wants to reel in.  But I really don't think it's going to happen, at least not for now.  I see us sticking with the status quo, and seeing what we can do to keep the Big East as a functioning non-football conference.

There is one scenario where I could see Notre Dame joining.  If the BCS conferences form 4 16-team conferences, and essentially close everyone else out of the BCS pie, then Notre Dame would tell the Big Ten to find a spot for them (and they would).  I think that ND and then non-BCS schools would have a strong anti-trust action if they find themselves in that position, however.

A member of the AAU, a natural in-state rival for Penn State, geographically appropriate, decent academics, historical power. When the Big Ten looks east, Pitt should be the first target.

Rutgers delivers the New York market, and is a member of the AAu, but their lack of power in football, historic or not, is an obstacle. If Notre Dame joins, Rutgers is definitely the first scratch, even if Notre Dame joins 3 years from now. Just not a great fit athletically, and this would almost entirely be a market based decision.

One idea I haven't heard floated out there is to pick up the rest of the pieces from the Big XII. Iowa State and Kansas are AAU members, and I'm sure Kansas State could garner an invitation. This of course leaves Baylor out in the cold, but nobody really wants them anyway. Iowa State provides an in-state rival for Iowa, and Kansas/K-State are pretty much a package deal. Would add some serious basketball cache with Kansas, too.

Okay, so I know Syracuse has fallen on rough times. But I seriously can't figure out why they aren't getting more talk about joining the Big Ten. If not for the New York market, I'd easily take them ahead of Rutgers. Historical power, AAU member. Just feels right. In fact, with the exception of recent on-the-field prowess in football, I'd put Pitt and Syracuse 1A and 1B out of the Big East teams.

I'm not sure where this came from, but I've seen it pop up in a few places. I don't think this will happen. Not a geographic fit, not great football history, and just doesn't feel like a good fit. Maryland should stick with the ACC.

Prediction: The Big Ten adds Nebraska, Missouri, Pittsburgh, Rutgers, Syracuse. Possibility that Kansas could wedge in here somewhere (more likely destination for Kansas, IMO, is the SEC - we'll get to that).


The Pac-10 has become the biggest mover and shaker here.

Multiple media outlets are reporting that the Pac-10 is adding Colorado. Which means that there is substance to the offer to the 6 Big XII schools. Ultimately, I think that this merger is going to happen, and the Pac-10 becomes the Pac-16.

If, somehow, the Big XII finds a way to hold itself together, the Pac-10 still needs one more team to make it to 12. In my opinion, the perfect fit here is Utah. They've made a strong case over the last decade, and are a good geographic fit. Other possibilities include BYU (religion issue), Boise State (blue field?), and Texas Christian (geographic anomaly).


Now things get interesting. If both the Pac-10 and Big Ten expand to 16 teams, you know that will force the SEC to respond.

The SEC has found themselves in a reactionary position here, but there will be plenty of opportunities for them to expand during this as well.  Here are some of the schools I think they should consider trying to add during this process (roughly in order of consideration that should be given:

Kansas / Kansas State
I think these schools should be considered as a package deal for entry into the SEC, due to their geography - they don't fit that well into the SEC, and having an in-state rival for Kansas would help with that transition.  This also creates a great instant basketball rivalry between Kansas and Kentucky, who has long been the only real show in town on the hardwood.

West Virginia
Adds power in both football and basketball, and (as a bunch of rednecks) just has always felt like an SEC school to me.

Florida State
Natural fit with the other Florida schools, and certainly adds plenty of firepower and cache on the football field, where the SEC's bread has always been buttered.

Clemson
In-state rival for South Carolina.  Also, I remember growing up thinking that they were in the SEC, and being surprised when I found out they were in the ACC.  They just always sounded like an SEC school.

Texas A&M
I know they've already flirted with the SEC, but it seems unlikely that that Texas bloc will get broken up. It is possible that A&M says 'Thanks, but no thanks.' to the Pac-10 to get out from under Texas' shadow, and opening up a spot for Baylor in the Pac-16.


Twelve teams didn't lead to football conference dominance for the ACC after raiding the Big East, and with the other BCS conferences blowing up or expanding, they'll be forced to follow suit. As the less attractive suitor when compared to the SEC, they'll have to be aggressive just to keep their own members, much less attract other quality schools.

Essentially, I see this playing out with the ACC taking the remains of the football schools in the Big East.

The big coup possibility here is having Notre Dame read the writing on the wall regarding conference affiliation, and joining the ACC instead of the Big Ten. That could be a huge move for the Irish, who could potentially bring Pitt with them and and their pickings of the Big East. Even Penn State could possibly be poached from the Big Ten in such a scenario.

Here's an intriguing ACC possibility, that restores some great rivalries, and creates a great all-around football, basketball and academic conference:

This is, of course, an extreme situation. But I think it illustrates exactly how complicated this all could get should things start to fall apart.

Shake It Down! Other conference impacts

The Mountain West, WAC, independents, and other Div. I-A schools are also watching these events play out. If there are any BCS schools left out in the cold, the non-BCS conferences will be like piranha trying to latch onto them. There may be major shifts between these conferences as well. Boise State was flirting with the Mountain West until they put an indefinite hold on the engagement pending the Big XII / Pac-10 shakeup. And who could blame them? The Big XII could hold together and snag Utah, TCU, BYU, etc. Maybe they can add a Kansas and Kansas instead, elevating the conference closer to BCS status.

All in all, the dominoes here could be tremendous. Hopefully, I'll be able to track developments as the come while I'm out in Colorado working and attending my brother's wedding. Thanks for reading!
Posted by Wacko at 6:52 PM 1 comment: 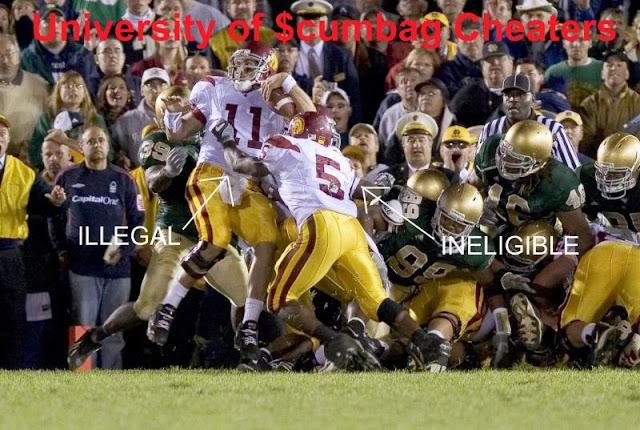