Brian Kelly has finished assembling his coaching staff. At first glance, I'm pretty happy with the staff he put together. Let's take a look at the roles each coach will play on this staff.

Bob Diaco will be coming with Kelly from Cincinnati, where he was the defensive coordinator, and he will continue in that role. He did an outstanding job this year getting 10 new starters to come together and play well. However, this to me is the most controversial hire, as he has limited experience as a defensive coordinator, and that's the one area where we need the biggest improvement. I had hoped Kelly would look for a bigger name to put in charge of the defense, but clearly he is confident in Diaco's ability to handle the job.

Charley Molnar is also coming from Cincinnati to be the offensive coordinator. In one of those "if it ain't broke don't fix it" type of moves, I think this is a great idea. While Coach Kelly will call the plays, they've clearly come to an arrangement that they are happy with, and I'm excited to see our new offense with better talent than Cincy ever had.

Tony Alford was retained from Coach Weis' staff. He will be moved from running backs to wide receivers, which I'm excited about. Rob Ianello was a great receivers coach, and Alford should be able pick up where he left off, and bring a bit more toughness to the position.

Tim Hinton is coming from Cincinnati, and will take Alford's running back job, which was his position with the Bearcats.

Kelly also borught Mike Elston with him from Cincy to coach the defensive line, and Paul Longo, the strength and conditioning coach.

A familiar face was brought back to the University as well, as Mike Denbrock was named the tight ends coach. A long time member of Ty Willingham's staff, he came with Willingham from Stanford and followed him to Washington. He spent last year at Indiana State as associate head coach, linebackers coach, and special teams coordinator. Although not officially announced yet, my money is on Denbrook being announced as the special teams coordinator, due to his previous experience in that position for Indiana State.

Kelly also hired his old buddy Chuck Martin, who was Kelly's assistant that took over GVSU when Kelly left, and who has won several national titles as the head coach of the Lakers. Martin will coach the defensive backs. Due to the fact that he was a head coach last year, Martin may get the edge over Denbrock as special teams coordinator.

The final piece of the staff is Ed Warinner, who was the offensive coordinator for the potent Kansas office the last few years. He'll be coaching the offensive line.

The following picture shows the past coaching stints for every member of Kelly's staff. 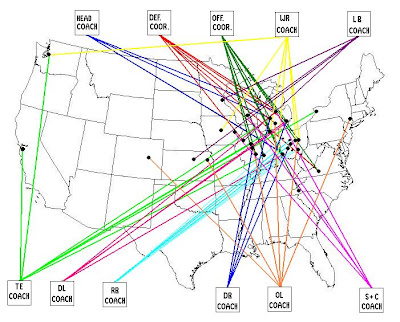 As you can see, with only a couple of exceptions, this is a midwest coaching staff. To a certain extent, this makes sense considering Kelly himself has only coached in the Midwest. But, not one coach on the roster has coached in Texas or Florida. However, Kelly has managed to take that into account in assembling this staff.

Diaco and Molnar, the coordinators, are both native New Jerseyites, so they should be able to maintain the stranglehold Coach Weis put on the northeast, and continue developing the Jersey, New York, and Pennsylvania pipelines.

Mike Denbrock, with his experience on the west coast at Stanford and Washington, is clearly a perfect fit for west coast recruiting.

It appears that Mike Elston and Tony Alford will work together in Florida. Alford has a year of experience recruiting for Notre Dame already, and as he was responsible for pulling Louis Nix out of Florida, when we didn't even have a head coach, I think we'll be fine there.

Chuck Martin will cover the Chicago area, and as a native Chicagoan, he should do well.

Kerry Cooks, despite only coaching in the midwest, is a native Texan. Therefore, he will be our Texas recruiter. This is probably the weakest coach from a recruiting standpoint, and Texas is a big responsibility.

Hinton will probably be the lead in recruiting Ohio - he's actually coached at three different high school in Ohio, and all of his experience has come from coaching in Ohio. He apparently has some experience recruiting Florida as well, so he'll have some role there as well.

I'm not sure what role Warriner will take in recruiting, but he does have a lot of experience at Kansas in the Big 12, so I'm hoping he'll work with Cooks in Texas and the plains states. I'm sure he'll recruit Colorado along with Denbrock, as he had a stint at Air Force.

My guess is that Alford will be named the recruiting coordinator, as he has already learned the ropes of recruiting at Notre Dame, and is clearly very good at it.

Overall, I'm pretty happy with the staff. They are all college coaches with lots of experience developing players. I think Alford is a great recruiter, and I've heard good things about Tim Hinton's recruiting ability as well.

I wish we had at least one more guy with some experience recruiting nationally, and I also wish we would have gotten a big name coach for defensive coordinator. Other than that, though, there's a lot to get excited about.

Several of the staff members took what would essentially be considered demotions to come work on this staff - Martin went from head coach to position coach and Warinner went from coordinator to position coach. Although I think Denbrock will get bumped up when he's named special teams coordinator, he took the job without knowing that for sure, a small step down from his job at Indiana State.

Most importantly, there isn't anyone who will be essentially learning on the job. It may take Alford a while to adjust to coaching the receivers instead of the running backs, but everyone else has done their job somewhere else at a high level.

I think Warinner and Martin are the best hires, while I'm a little shaky on Elston and Cooks.

Now, it will be fun to watch as the coaches hit the road and close out this recruiting season.
Posted by Wacko at 5:21 PM 4 comments: