It's time for this team to wake up the echoes. More rides on the outcome of this game than any game in my memory, and all we have to do is rise up as one, and knock USC off of their lofty perch.

This game is the stuff of legend. Notre Dame beating the Black Knights of Army on the banks of the Hudson behind the strong arm of Gus Dorais and the soft hands of a young Knute Rockne. The Four Horsemen. The Irish walking into the Rose Bowl and beating Pop Warner's Stanford team. Win one for the Gipper. The 1945 tie of the vaunted black Knights of Army. Breaking Oklahoma's winning streak in 1952. Michigan State "Game of the Century" in '66. The Chicken Soup Game. The Trojan Horse game. Catholics vs. Convicts. '93 Florida State. 2005 USC.

This is the time for Notre Dame to rise again.

We have been through prugatory, and suffered through some of the darkest times in Notre Dame history. The greatest game in the last 25 years was arguably a loss to USC. It is time for this team to take its place back at the top of college football.

This is our greatest rival. Our arch enemy. Southern Cal is a team that once had a proud tradition, but has soiled its reputation by hiring Pete Carroll. The media wants to exalt him as a hero, but he is truly a villain. Growing evidence shows that USC has engaged in behavior that very likely could lead to NCAA sanctions. They willingly have associated themselves with a known pimp, drug dealer, and possibly murderer in Snoop Dogg, and indeed have asked him to actively recruit players to Southern Cal.

Where USC may have at one time been worthy of our respect, they are no longer. They have gone to the dark side, and are now truly our antithesis.

Through all of the pain and torment, Notre Dame still holds true to its basic ideals. We do it the right way. Our players are full members of the Notre Dame community. They go to class. They graduate. Often with honors. We recruit our players by the book. And further, we hold our players to a higher standard of behavior. Criminality and immorality will not be tolerated.

Yet still we rise.

This game may not have the glitz and glamour and hype of some of the classic #1 v. #2 matchups in the past. It may not even be the biggest game of the week. Gameday will be down at the Red River Shootout.

But this game represents a pivotal moment in Notre Dame history.

Win, and the critics are silenced. The Irish take their rightful place in the polls, and earn the right to be in the National Title Conversation at the end of the season. Clausen will take his place as the leading Heisman trophy candidate. Weis will keep his job. And, undoubtedly multiple players visiting this weekend will feel the Notre Dame Spirit and choose to suit up for Notre Dame.

We will be BACK.

Lose, and the Irish fade back into mediocrity once again. Clausen's Heisman hopes are dashed. Weis' job security becomes tenuous at best. The critics grow louder, to almost a fever pitch. And, although we now have the talent to compete, we will probably start anew with a different coach and another hope that the new savior will help us Return to Glory.

But we will not lose. We cannot.

We are Notre Dame.

Rally sons of Notre Dame,
Sing her glory, and sound her fame
Raise her Gold and Blue,
And cheer with voices true,
Rah! Rah! For Notre Dame.

We will fight in every game
Strong of heart and true to her name.
We will ne'er forget her
And we'll cheer her ever,
Loyal to Notre Dame.

Cheer, cheer for Old Notre Dame
Wake up the echoes cheering her name,
Send the volley cheer on high,
Shake down the thunder from the sky,
What tho' the odds be great or small
Old Notre Dame will win over all,
While her loyal sons are marching
Onward to Victory!
Posted by Wacko at 12:01 PM 2 comments:

The closer we get to the game this weekend, the more that it feels like an epic turning point for the program.

A record number of recruits is coming for the game - more than anyone can recall, including 19 of the nation's top juniors.

We haven't beaten the boys from Southern Cal since Pete Carroll's first year.

Clausen's Heisman campaign is make or break in this game.

Our shot at the BCS Championship, in critical condition and not expected to pull through, could get a shot in the arm by a big win.

Certainly, our chances of playing in a BCS game probably hinge on this game.

Weis' career as head coach at the University of Notre Dame may be decided by the outcome of this game.

I know I speak for many Notre dame fans around the country when I say we've had enough.

This is the time, and this is the team. If ever there was a crystal clear moment where we are being given the opportunity to rise up and give glory to Notre Dame, the moment is now.

Remember Catholics vs. Convicts? I think this is bigger.

Sure, #1 vs. #2 is a sexier matchup. But this is a program that is on the verge of fading into mediocrity. Many people have already written the Irish off as a has-been program. We've developed a reputation for rolling over against elite competition.

If you want Notre Dame to regain it's place as an elite team, THIS is the game where we do so.

We've reached a turning point, the proverbial fork in the road.

It's time to go all in. Win, and your back at the top. Lose, and you're back to square one as a program.

IBG: Quest for the Signature Win

1. The weather forecast for Saturday's game (as of this writing) has the high temperature in the mid 40's with some chance of rain (or snow?). What weather would give Notre Dame the best chance to beat USC? Why?

On paper, one would think that the strong running game of SC would do better in the snow than our pass-heavy offense.

But I don't care. Half of those pansies on the Trojans haven't ever played in snow.

And for those of you (like myself) that have, you remember how miserable it was the first time. You can't feel your fingers, you're miserable, and you wonder about the sanity of the people who told you to suck it up and go play.

We've been there, done that.

SC's defense is legit. And I felt much better about our chances when we had Floyd in the lineup.

That said, I think that this game, more than any we've seen, will resemble the Patriots offense. Look for Weis to throw the book at 'em - 5 wide, goal line, Leprecat, spread, pro set, I formation, Double tight, bunched receivers. Hell, I wouldn't be shocked to see a play run from the A-11. By forcing the defense to react to a new formation on every play, this offense can take advantage of mental mistakes.

And that is how we beat them - by forcing mental mistakes. These guys can hang with our offense athletically, but if we can turn this into a chess match, I like our chances.

I excpect SC to score some points. They have some legitimate weapons, and will get a few TDs.

The key here is to finally create some disruption. SC has a great O-line, but we need to find a way, somehow, to land some of these blitzes. If we can blitz effectively, we'll eliminate the big play over the top and rely on their ground game. And I like our chances to slow down the run game.

4. In 2008, with Michael Floyd unable to play due to injury, Golden Tate had 2 catches against USC for a team-high 15 receiving yards. How do you expect Golden Tate to play against USC this year?

I think the Tate has proven that he can do a lot more than catch passes this year, and I expect to see us continue to be creative on offense in ways to put the ball in his hands.

That said, I think that the key receivers in this game will be sophomore Kyle Rudolph and tailback Armando Allen. With SC smartly rolling coverage to Golden Tate, these guys will be crucial as outlets for Clausen throughout the game. If Clausen can be patient, Golden will eventually break through the coverages.

5. Jimmy Clausen has started to get some Heisman buzz. In your opinion, which Notre Dame player is the most deserving of Heisman attention, Jimmy or Golden Tate? Why?

Golden Tate is far more exciting to watch than Clausen, and has that flash that would lead me to believe that he is the best non-quarterback candidate in the country. He's certainly most likely to have that "Heisman moment" that becomes indelible in the minds of voters. But, Clausen's numbers don't lie, and he's thrown game-winning passes to multiple players.

Long story short, Jimmy is most deserving of the attention, but Tate has a better chance of actually winning it thanks to his dramatics.

6. Overrated or Underrated. Notre Dame cracked into the AP Poll at #25 this week. Are they overrated or underrated at #25? Where would you put them in your poll?

The Irish are underrated at #25.

They should be ranked ahead of Houston (lost to UTEP) , Oklahoma (2 losses), , and Oklahoma State (lost to Houston). A last second loss in the Big House should put the Irish on par with South Carolina (lost to Georgia), BYU (lost to Oklahoma) and Utah (lost to Oregon) in the rankings, ahead of the previously mentioned teams.

Which would put them somewhere between 19 and 22.

Much like OC Domer, I'm gonna have to come down pretty firmly on the side of "Ambassadors of Collegiate Goodwill." 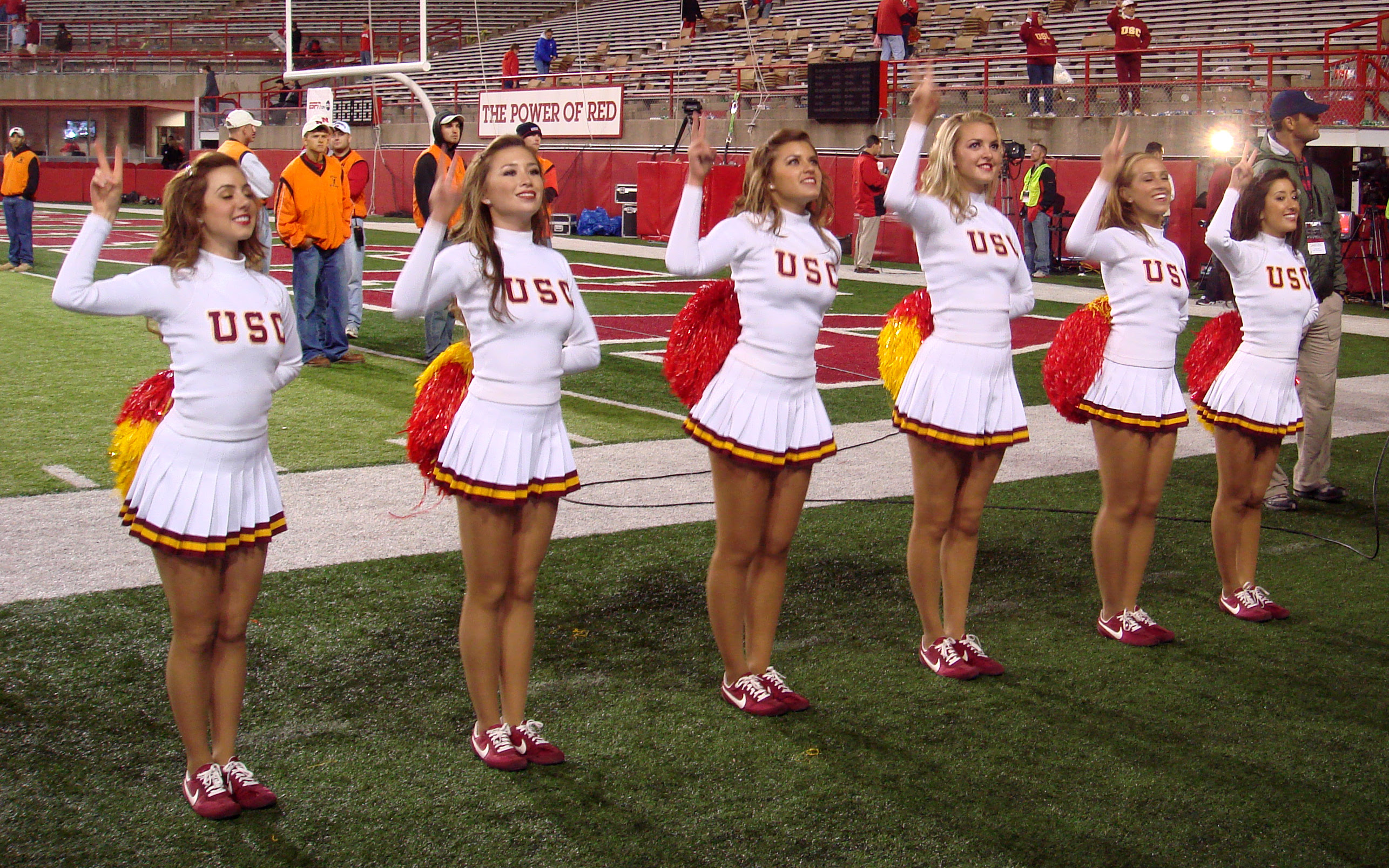 8. Green Jerseys? There's a lot of "green" talk coming from campus this week, and it raises the question of whether the team will be wearing green on Saturday. Do you want to see the green jerseys or not? Why?

And I think that the decision should be made in the locker room by Coach Weis and team leader Jimmy Clausen.

'Cause if you bust 'em out and lose, THAT will be their legacy.

And on that note, I hope they do have the confidence to pull them out again.

I think that the most impressive thing that the Irish could do this week, especially after the late game heroics required against their last 4 opponents, would be to have a 2-score lead late in the 4th quarter.

If we end up having a close win, we won't get the legitimacy we need from this game. We'll be stuck with the caveat that we play to the opponent.

Also, if there are any controversial calls (and there always are), a close win will give the Notre Dame haters in the media (I'm talking to you, John Saunders) something to use to discount the Irish victory.

And I want this game to leave NO doubt that the Irish are back.