Here is my key to victory this week:

This is a horrible Washington football team that can't do anything right. They've got a lame duck coach, have lost their star player, and have no defense to speak of.

Now, when I say show up, I mean that this team needs to come out and play the same kind of football that they do in practice against the second string, 'cause that's about how good the Huskies are in Willingham Year 3. In fact, with Charlie's recruiting, our second team may even be better than Washington's #1 guys.

That said, this is the kind of game that it is far too easy for a team to look past. We have a tough Pittsburgh team rolling in to South Bend next week, and we have a long plane ride to get out there to Seattle. The guys have been off for a week, and might have some rust to knock off.

This team needs to come out and play smart football, taking care of the ball and executing within themselves.

I don't care what Willingham does to exhort his players, I don't care if they stole a copy of Coach Weis' playbook. There is NOTHING that this Washington team can do to beat Notre Dame this week. Nothing.

1. You're having some beers and brats outside Notre Dame Stadium, just chilling with friends. If you could have one Notre Dame player or coach drop by to share a drink, a brat and some stories with you, who would it be?

No question, I would pick Raghib "Rocket" Ismail. His Miami-ND story about the brawl before the game alone would be worth it. And he does a great Lou Holtz impression.

Honorable mention: Stonebreaker, Zibby, Laws, or Kuntz. These guys always struck me as being just a little bit off their rocker, and I'm sure that they could all pound beers with the best of 'em.

2. What was your best experience ever with a tailgate party?

Again, this one wasn't hard. A couple of years ago, my buddy Brad and I were headed to a game (I don't recall which one, as the game was during the Willingham era, when the tailgating was more important than the game itself...)

We parked in the lot that now comprises the softball stadium, and the guys next to us were down from Canada. Those crazy Canadians had 5 cases of beer - and there were only 4 of them. We all sat around getting blasted, and the Canucks were more than happy to share their Natty Light with us. Their over the top use of cliched Canadian phrases ("Take off, eh!") combined with their genuine love for Notre Dame football (one of them shared his Leprechaun tattoo with us - thank god it was on his chest and not in some nether region) made it one of the most enjoyable and pure tailgating experiences of my life. 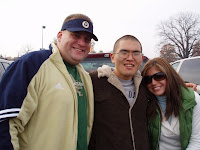 A close second came last year, when I stumbled upon a bunch of my law school classmates that had come in for a game. I had gotten wasted well before I met them, and some random person had given me a free hat with what appeared (to my drunk ass) to be a picture of Che Guevara on the front of it. I rambled on at length about how I was a rebel with my Che visor on. When I sobered up the next day, I realized that it was actually a Geico caveman visor. Also, my classmate Steve Shim (middle of picture) and I were completely tanked as we walked to the stadium together. I got in and found my seat, and had sobered up enough by the fourth quarter to realize what was goin on. Later on, I asked Shim how he enjoyed the game, and despite leaving him AT HIS GATE, he confessed that he never achieved making it into the stadium.

And I still say I was robbed in the voting for Biggest ND fan, Sara (pictured, right).

3. There are lots of great tailgate experiences around the country - what school's tailgate tradition do you most want to experience?

The one tailgating experience that intrigues me the most is "The Grove" down at Ole Miss. Tailgating in suit and tie? Sign me up.

4. Indiana decides that their drinking laws are far too un-draconian, and drinking is now forbidden on Saturdays. The Excise Police stop by your tailgate, and proceed to dump out the liquor you were attempting to hide from them. What do they pour out?

Well, they probably poured out some Rum, Vodka, and a ton of beer. While Miller Lite is my beer of choice, I'll drink just about anything. Start with a screwdriver, move on to rum and diet, then level off with a steady stream of beer until game time.

5. OK, I couldn't leave it alone completely. How do you feel about the impending end of the Coach Willingham era at Washington?