Read all about it! Notre Dame's defense torn to shreds! Oh, wait. Wasn't that last week's story? Or maybe the week before. I know I've read this story before...

This week's IBG hosted by the OB - Subway Domer. We're supposed to provide a headline for each question.

1. After weeks and weeks of living on the edge, Notre Dame finally fell off of that edge into a pile of shit. Please describe your mental state since the Navy game. Are you hopeless or hopeful? Why?

I'm so lost right now, I've spent all week sort of floating through life. I can't focus at work, and I'm losing sleep. I know this team is talented, and the only people beating them right now is themselves. I don't know which was is up.

I'm vacillating wildly between firing Coach Weis and staying the course. I don't know which way this program is headed, and I'm not entirely sure how to fix it.

Happily, this weekend's row with the Pitt Panthers should tell me everything I need to know about Coach Weis and this football team. Win, and you can get this ship righted and build some momentum going into next season. Lose, and it becomes time to start praying for a miracle hire by new AD Jack Swarbrick.

2. Given the sorry state of the Fighting Irish defense, are they capable of slowing down Pitt's offense, or will Stull, Baldwin, and Lewis have career days?

When I was looking at the matchups this weekend, I was not encouraged. Bill Stull is 5th in the country in passing efficiency. In a run-first offense. The Panthers are 16th in the country in scoring offense. Our biggest issue is giving up the long passes, and Baldwin is averaging 20 yards per catch.

They're gonna score some points.

3. Notre Dame has had serious Red-Zone issues this year. They can't score... why is that? What needs to be corrected and how can they do this?

This is one of the things that is most puzzling me this year. Offense is different when you get down by the goalline, as speed becomes less of a factor, and size and strength become more important. We are not imposing our will against defenses in the red zone. We should be pounding them, and using the tight ends on inside routes and our tall receivers on fade routes. Instead, it seems like every time we get close, we just throw a couple of fade routes and then kick the field goal. We need to run, and use our size advantage inside.

With Rudolph gone, however, I'm guessing we'll see more of the fade route since Floyd is healthy. My hope is that Armando Allen will be back as part of this offense.

4. Charlie Weis and Dave Wannstache started coaching their alma maters at the same time. They have both coached on crutches. They both seem to recruit fairly well. They are both considered disappointing in their respective 5 year campaigns. After reviewing their total body of work, who would you rather have coaching ND in 2010? Explain.

I'm still going to go with Weis. Although Wanny has managed to get his team into the top 10, he did so in a weak Big East. His biggest win is over Navy (which I'm certainly in no position to scoff at), and the loss was to a now 4-5 NC State team. This team would only have 1 loss against that schedule as well, and may have been able to actually beat Navy, since they would have been able to focus on them as the toughest team on the schedule, rather than coming out flat and uninspired.

Weis has his issues - don't get me wrong. I just think that, at the end of the day, he's better than the Wannstache.

5. Prediction time. How does this game play out. Please include a score, an offensive MVP, a defensive MVP, and a sleeper.

Notre Dame comes out of the gate pissed off and ready to hurt someone. They get an early lead, but the Panthers punch back with their own explosiveness by scoring a couple of LONG TDs with Baldwin, and another rushing TD by the freshman RB Lewis. Notre Dame and Pitt eventually settle into a shootout, trading scores and leads until the end of the game. Clausen scores the go ahead TD on a quick slant to Allen with 1:15 left on the clock.

Weis, in his excitement, suffers a mild heart attack and is carted off the field in an ambulance.

Then Stull comes out and tears the ND secondary to shreds en route to a game winning TD pass to Baldwin.

Yes, folks, you read that right. Domer Law, the biggest ND homer and eternal optimist, picked us to lose a game. It's sad, but true.

What a weekend. It's Monday morning, and even after a relaxing Sunday and a good night's sleep both Saturday and Sunday night, I'm emotionally spent. To be fair, this doesn't all fall on the Irish - there are personal and work issues that decided to rear their ugly heads this week as well.

But, the fact remains that for the first time since I was a child, I shed a tear after the game. It was right during Navy's alma mater, and I was honestly surprised at how emotional I felt.

All of the past 20 years of frustrations and disappointments welled themselves into one perfectly formed teardrop, which slowly wend it's way down my face as the Navy players sang jubilantly after their 2nd straight win at Notre Dame Stadium. Part of what I was feeling was pride - I've watched far more Navy games than any other opponent in my lifetime, as they were always the left-over tickets once everyone else in the family had the opportunity to pick which games they would attend with my grandmother. Personally, I was just happy to go regardless of opponent. And after watching so many times the Navy players lay everything on the field for a full 60 minutes, to see them earn a victory is special to me, even though it does come at the hands of my Irish.

But I was at the 2007 game, too. And there were no tears, despite it being the worst season in Notre Dame history.

This week was different.

This week, I ended the game with my eternal optimism for Notre Dame football shaken.

I don't know where we go from here.

Our BCS hopes were coughed up with Jimmy's fumble inside the 2 yard line. Jimmy's Heisman campaign bounced right between Michael Floyd's shoulder blades and then disappeared. Coach Weis' career may have just sailed off course like Nick Tausch's 2 field goal attempts.

And that's what hurts the most. Last year, after the Syracuse loss, I had the knee jerk reaction of wanting him fired. I spoke and wrote out of anger and frustration, but inside I knew he'd get another chance. This team was too close to try and shift gears.

And even now, I'm hesitant to call for Weis' termination. The pieces to the puzzle are all here, and this team clearly has the talent and ability to beat anyone in the country. Indeed, the only people beating the Irish this year are the Irish themselves.

Now, this isn't meant to be any disrespect to the men of the Naval Academy. They have busted their ass for the past decade and a half and in the process have built themselves not just a good team, but a solid program that the rest of the nation needs to start respecting.

But even they know, inside, that they couldn't beat this Irish team if they were hitting on all cylinders.

And that's why I can't quite bring myself to pull the plug.

I agree with everything Brawling Hibernian and OC Domer have to say. While talking to Sarah from Bad Trade over brunch on Sunday, I admit to having the knee jerk reaction of wanting to fire him.

But now, sitting at my desk Monday morning, doubt and uncertainty have clouded this entire program, to the point that I don't even know for sure whether or not we should can Charlie.

But, if we win out, should he stay or should he go?

This team will then be 9-3, with close losses to a top 5 USC team, a solid program in Navy, and a Michigan team that started with a lot of bluster before faltering down the stretch. We'll play in the Gator Bowl or Cotton Bowl against the likes of Oklahoma or Miami.

Win or lose in that game, it's too late to be making a decision on Weis' future as the result of a bowl game.

If we win out, I think Weis keeps his job. He broke the bowl streak, and the streaks against BC and MSU. He almost beat USC, and he beat Boston College - the first win over an opponent with a winning record. The win over Pittsburgh - Weis' first since 2006 - would be the difference, as well as a win over what should be a ranked Stanford team as well.

But drop even one of the next three, and the picture becomes a lot murkier.

We lose to Pitt, and once again the charge arises that we beat up and bad to mediocre teams, but can't beat good teams. Lose to UConn, and we have yet another loss to an average team that we should beat. Lose to Stanford, and we get both charges, as inconsistent as that may be. Also, another loss would bring up the fact that Weis' teams start out strong and fade down the stretch.

More converning to me, however, regardless of whether we win out and retain Weis, is that I feel like the entire program is on shaky footing right now regardless.

Fire Weis, and we have to bring in yet another coach with, at best, decent credentials. Forget the pipe dreams about Meyer or Stoops. That's just not going to happen. And I have no idea why everyone is so high on Gruden. He was a mediocre NFL head coach, and other than graduating high school from South Bend Clay, I'm not sure why people seem to want him so bad. Brian Kelly and Gary Patterson are probably the front-runners, and neither of them are particularly exciting for me, except that they are having unprecedented success at their current schools right now. And that's without the recruiting restrictions and academic requirements of Notre Dame.

Not that I don't think that those coaches could succeed here. In fact, whoever takes this job if Weis leaves will have a great foundation upon which to build their legacy. Even if both Jimmy and Tate leave, you still have Rudolph, Allen, Hughes, Floyd, Kamara, Goodman, Parris, Ragone, Toma, Evans, and Walker at the skill positions. Ninety-five percent of the coaches in the country would trade their talent at the skill positions for that in a heartbeat. And the defense, which still sucks, is loaded with talent that is lacking only proper coaching.

But, we'd be back at square one going into a season where we should be easily the favorite to win it all. Clausen, Floyd, Tate, and Rudolph could all claim to be the best in the country at their respective positions. I can't remember a team with that much star power at the offensive skill positions. And yet we're sitting at 6-3, staring at uncertainty headed into next year.

I'm not sure where we go from here. Indeed, the image that keeps running through my head is from Chris Van Allsburg's Mysteries of Harris Burdick. I don't know why, but here it is for your viewing pleasure: 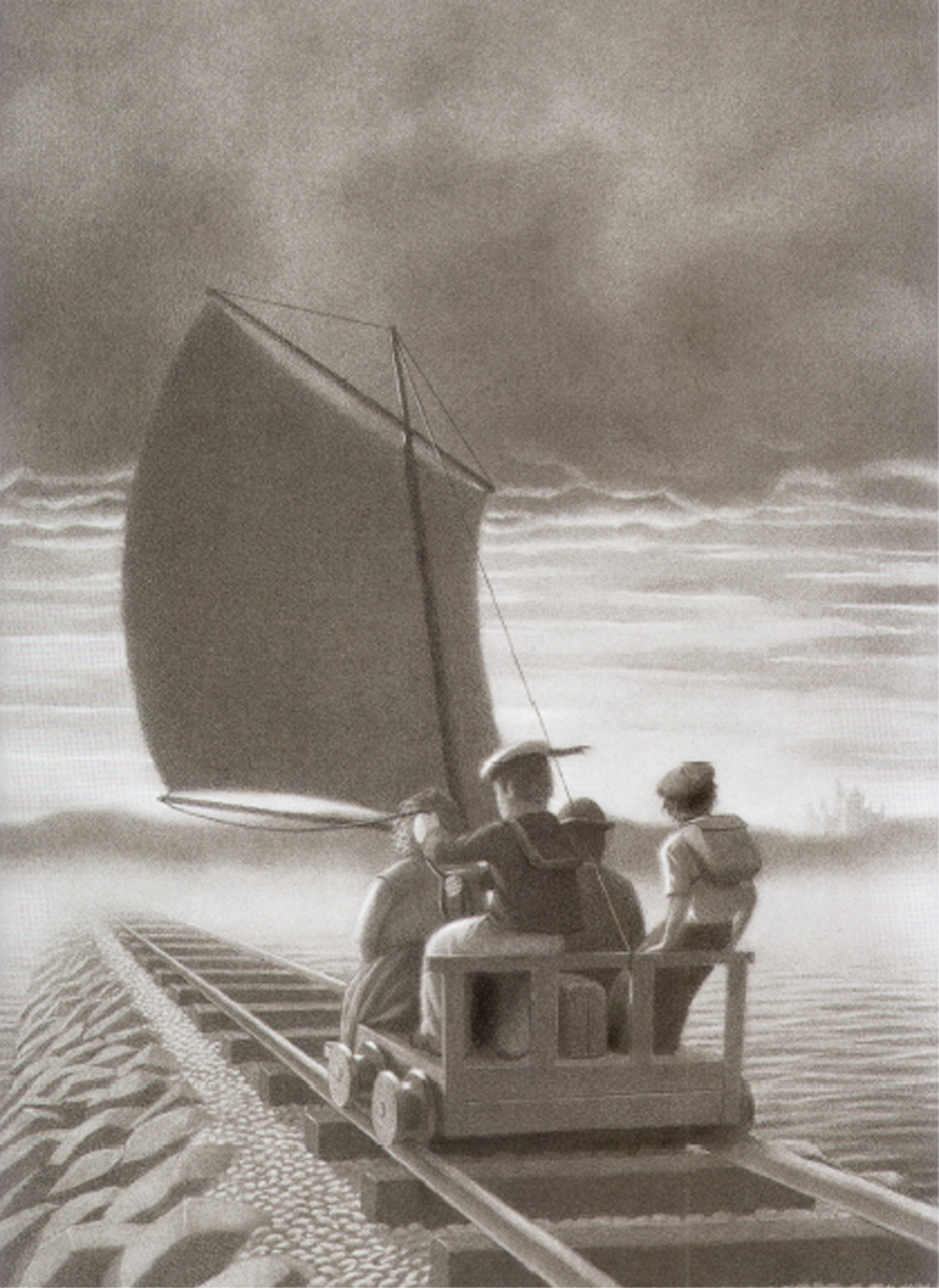